Michael Kors delivered the feel-good moment of fashion week with a nostalgic romp through the Seventies. 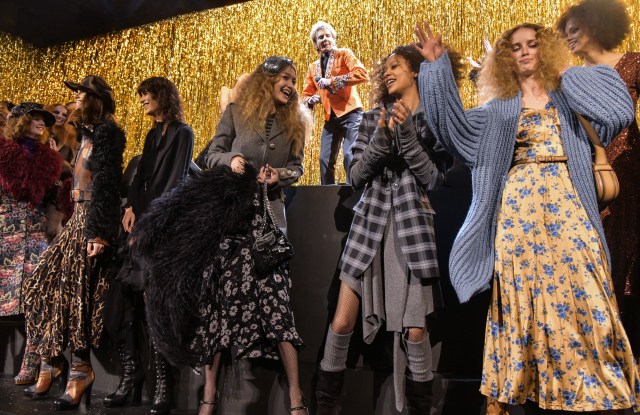 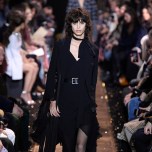 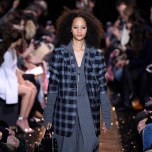 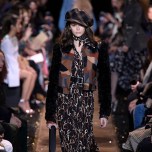 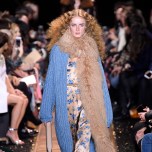 You can count on Michael Kors to deliver the feel-good moment of fashion week and lift spirits in a season wracked with anxiety and doubt. He did it by hosting a fun little a.m. disco, capped off by a surprise performance by none other than Barry Manilow, who got all generations, from Bella Hadid to Patti Hansen, singing along to “Copacabana” — all before 11 in the morning.

“The greatest thing about this city is the cast of characters,” Kors mused during a collection preview of his latest homage to New York, a nostalgic romp through Studio 54, complete with an actual licensed collection of logo merch. “Studio 54, everyone always talks about sex, drugs and rock ‘n’ roll, but the best thing about it was the mix; Nan Kempner next to a street boy.”

Kors was thinking back to his teenage years in the Seventies, when girls and boys dressed for WWD’s photographers, not Instagram, and stores weren’t “optimized” for selfie ops like the SoHo pop-up he opened with Hadid for his Michael Michael Kors brand last week.

“Everything in my life at that point converged in the West 50s,” he said. “My first job was Lothar’s on West 57th Street. I went to Studio 54 instead of going to my prom.…It was dance, disco, ballet, the Russian Tea Room, the Roseland and the Ziegfeld, the joy of getting dressed up and having fun.”

For Kors, dressing up is still a performance, and the stars of the season were romantic crêpe de chine, side-swipe, bias-cut dresses in florals or Deco prints, one featuring tiny dancer bodies. “Ruffles, feathers, fringe, anything when you walk down the street that catches the breeze,” the designer said dreamily.

The romance was tempered with sharp tailoring, like a mixed herringbone coat with perma-pushed-up sleeves (so you don’t need to “walk around with rubber bands on your sleeves,” like Kors did back in the day). Coats-with-character options ranged from a snug patchwork leather bomber with faux-fur sleeves worn by Kaia Gerber to a show-stealing, fully hand-embroidered, faux-fur coat that had Bianca Jagger written all over it. “I feel like we need to ship it with a sign that reads, ‘not real,’” said Kors, who recently joined the lineup of designers going faux.

Accessories riffed on luggage, from a tapestry-patterned overnight bag, to a canteen with the MKC logo hardware, based on a doodle Kors did at one time, when he probably couldn’t conceive of being a multibillion-dollar brand-builder atop a new American luxury conglomerate.

Platform shoes and boots twinkled with sequins or lit up with colorful patchwork was a mix of real snake and faux croc.

The Seventies fest continued for the guys with decade classics such as bell-bottom power suits paired with shirts with extended collars, belted safari jackets and leisure suits. There was even a glittery tux that would be the perfect outfit for him to wear to join her on the dance floor. In fact, eveningwear was one of the brighter spots, from a sharply executed tuxedo jumpsuit to a leopard metallic fil coup dance dress worn by Karen Elson.

Although shares of parent company Capri Holdings are soaring, the Michael Kors brand has underperformed in recent quarters, with same-store sales declines. As spirited as the show was, it’s not clear if this collection — which felt a bit like a vintage revival rather than a modern remix, and lacked an air of luxury — will give sales the lift they need. There’s also the question of whether Studio 54 still has enough currency to create desire for a logo handbag, much less an allover sequined minidress with marabou feather sleeves — at least beyond those who can still remember going there.

Then again, looking around at guests watching Manilow swing his hips, including “If Beale Street Could Talk” star Regina King (guess we know what she’s going to be wearing for the Oscars) to blog stars of the minute, everybody knew the words to “Copacabana.” As the song says, “Who could ask for more?”