Fashion can't cure the world's ills, but it can lift spirits. So says Tom Ford, who offered a lovely, gentle collection for fall. 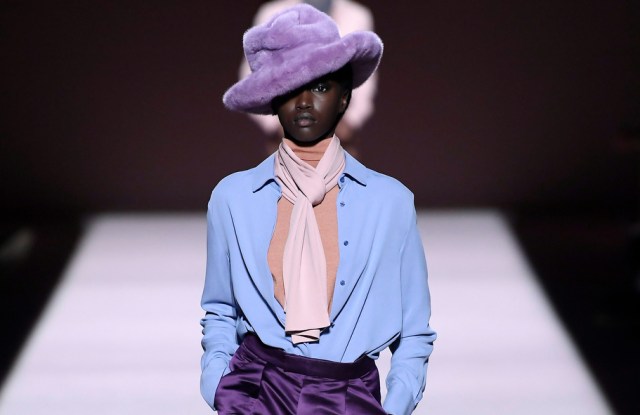 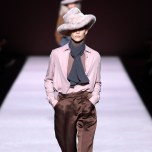 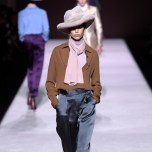 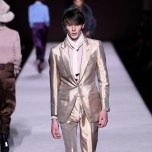 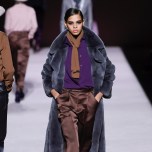 Tom Ford, fashion idealist. It’s not a context in which one typically thinks of the man who, more than any other designer, is synonymous with sex manifested as clothes. Yet Ford takes a broader view of fashion, seeing it as a powerful life tool. To be your best, to feel your best, dress your best and you’re halfway there.

The collection Ford showed on Wednesday night started from that premise, with an atypical Ford twist. In answer to the ominous cultural moment, he swiped left on aggressiveness and right onto a gentler mood. “In today’s world what do we want?” he offered post-show. “Beautiful, soft color; something with ease; something not aggressive, which is odd from me. I wanted beauty.”

In fact, Ford started this temperate approach last spring, developing the calm aura more acutely here. But calm his way, which is to say, sensual, polished, perfect. The Ford woman is never demure or undone. He opened with soft shirts over high-shine satin trousers, rolled at the ankles, the simplicity taken up a glam notch with oversize fake fur fedoras and neck scarves looped just so. Often, he tossed on an abundant fur, some fake, some real. (The transition away from real fur isn’t always seamless. Though not declaring himself fully fur-free, Ford last year said he would limit his use of animal skins to food byproducts, mostly shearling. Rabbit, used here for a few pieces, also falls into that category, but Ford has decided to re-fabricate those coats in faux fur for production.) These slouchy silhouettes found counterpoint in the precision tailoring of waist-conscious jackets with defined shoulders worn with that same trouser, and a sensible-chic slim skirt, its demonstrative side zipper opening on an additional fabric inset for ease of walking. It all came in a glorious palette — arresting combinations of soft pinks, blues, grays and flesh tones, along with shots of deep burgundy and men’s wear grays and blacks.

The collection felt new yet highly signature — even over polite underlayers, shirts unbuttoned to there recalled long-ago Amber Valletta; rich-hued tailored velvets, the tux that Gwyneth wore; the colors, a nod to Ford’s Saint Laurent fixation. “Didn’t I spend time in Paris being influenced by Loulou de la Falaise, who rolled her pants hems up?” he mused. “By the time you’re my age, it’s very hard to cite your references. At this point, you’ve filed everything away in the mental hard drive and you just do it.”

Speaking of which, what’s more Ford than languid jersey at night? A series of gowns featured thick chain fastenings and matching long cardigans, which, as the models walked, wafted for a discreet cape-like effect. Simply alluring.

Which was exactly Ford’s point. Last season, his husband Richard Buckley gave a concise review after watching the spring show online. “Richard said, ‘it was beautiful, but there was no news there,’” Ford recalled. “And I said, ‘but that is the news — it’s beautiful clothes for people to wear.’” News flash: Ford delivered.