Tomo Koizumi seized the opportunity for a NYFW runway show and made the most of it — literally. 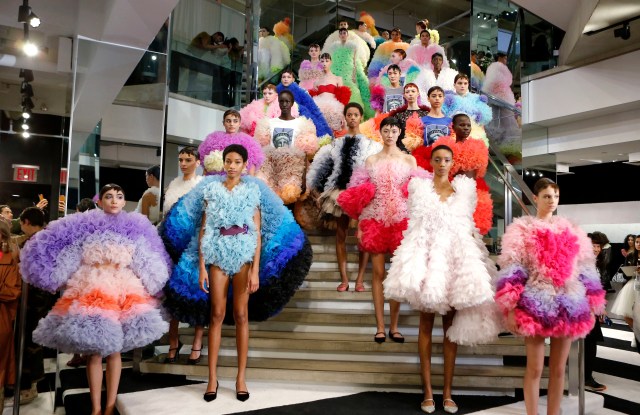 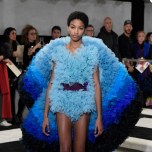 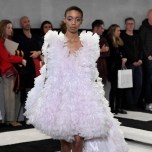 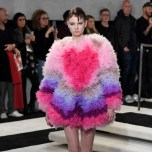 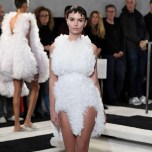 Technology has upended everything, including some old bon mots such as, “It’s not what you know, it’s who you know.” Today, it’s also who knows you. Because if Katie Grand knows you from Instagram, on a tip from Giles Deacon — or at least, if she knows your fluffy stuff — and she knows Marc Jacobs and Pat McGrath and Guido Palau and Tabitha Simmons and Anita Bitton and a host of fabulous models, then you can have a fashion show that gets noticed.

On Friday night at the Marc Jacobs store on Madison Avenue, Tomo Koizumi had a fashion show that got noticed.

It happened just days after he, his helpful sister, a friend and three boxes packed with colorful frills arrived in New York from their native Japan. The designer set up a pop-up studio in a corner of Jacobs’ headquarters on Spring Street, where he immediately got to work with Grand. The rock-star stylist had already photographed earlier pieces of Koizumi’s for “Love Magazine,” and when she saw the pictures of his newer, voluminous work, she was intrigued. “I felt this idea of clothes being bigger and more fanciful and more joyous was very in the air,” she said during a preview. From Koizumi, “I got that feeling of vastness and joyousness.”

Zeitgeist-y, perhaps, though Koizumi said he doesn’t often “check” on what’s going on in the fashion world, preferring to rely on his imagination. He then clarified: “Of course, I check a bit, but not much.”

At the show, the models made their way down the store’s wide staircase to the lower level, where the riotous explosions of rippling swirls and colors played in heady contrast to the graphic precision of the bold black-and-white carpeting. The looks, densely packed assortments of polyester ruffles, played like an otherworldly fairy tale, its fantastical heroines pretty but hardly pushovers — no wallflowers here. Over the top, joyful and great fun — absolutely. But it was more than a diversionary romp courtesy of Grand. Koizumi’s constructions were quite something, each one a distinctive marvel in its out-there euphoria. Many were utterly their own thing, while others nodded cheekily at some pretty noteworthy fashion stars of yore — Marie Antoinette and the Empress Josephine. As for the Lady Liberty tees — she’s hot these days, and every collection needs its dressed-down moment.

Will Koizumi translate the exposure and gleeful response into something viable off the runway? Time will tell. Certainly one can imagine pop-star adaptations, (back home, he’s a costume designer and has done work for many musicians. You may have heard of one: Lady Gaga.) Ditto possible red-carpet modifications. Koizumi is clearly talented and wildly inventive, and he has an unabashed sense of wonder. These days, we can all use a little (or a whole, colorful, unbridled bunch) of that in our lives. Tomo, bring it on.