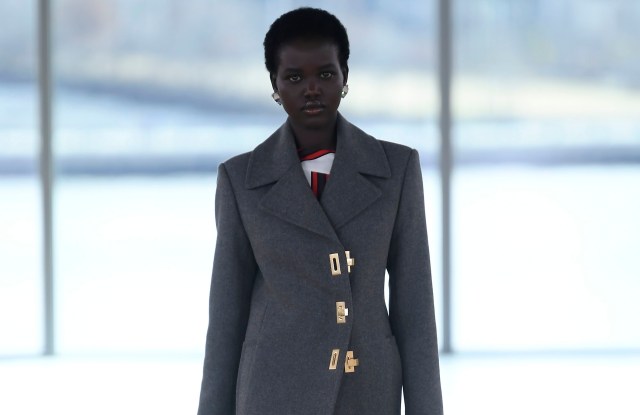 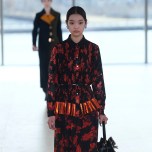 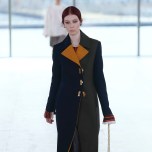 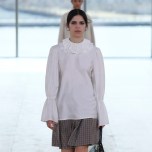 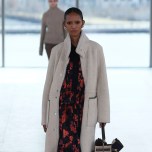 Black Mountain College, a progressive, experimental college founded in 1933 in North Carolina, was the backdrop for Tory Burch’s fall collection. As an art major, Burch was obsessed with the school for both its avant-garde ideals and its famous students and professors, citing Robert Rauschenberg, Cy Twombly, Anni Albers and Willem and Elaine de Kooning. “Women came into their own…women were wearing pants,” she said backstage after her show. “It wasn’t about race or gender, it was only about this confluence of creatives [who] came together and formed what modern art in America would be.”

Burch’s fall offering mixed modern, polished classics — prominent herringbone and checked tailored trousers and long, loden wool coats with rectangular, gold clasps, and cozy, neutral-toned sweaters — with more eccentric offerings, including knit fringed or paillette-adorned ponchos, pleated hems and ruffled sleeves. There was also a sequin-emblazoned chiffon dress with a square paillette fringed hem over a woodblock floral-print plissé georgette top with ruffled sleeves peeking out from the camel-hair topcoat just so. Fabric manipulation, a starting point for Burch in the collection, resulted in a divine print on knife-pleated skirts and dresses depicting “joyful people dancing,” or a variety of floral blossom and paisley motifs, and led to the addition of exaggerated ruffles. A blue-and-white floral crêpe de chine frock with a curly, ruffled collar, billowy velvet sleeves and hem that was paired with sharp beige boots and cut-glass, tiered earrings was exquisite for day. Burch’s mix of simpler, clean separates with artful, textural details exuded an utterly chic élan.