For her exquisite collection for Alexander McQueen, Sarah Burton took inspiration from the mill towns of northern England. 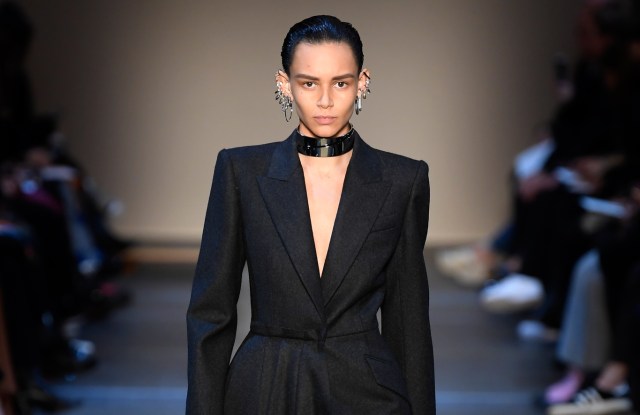 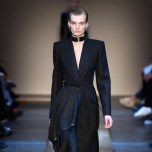 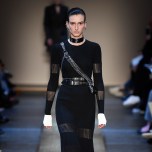 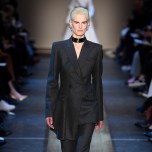 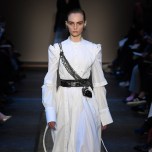 Celtic warrior goddesses, you’re off duty for a while. For fall, Sarah Burton sought more real inspiration. It started with a homecoming in the north of England, where she visited old mill towns, some with still-operational mills that supply the classic, refined men’s wear fabrics she has long used at Alexander McQueen.

“We thought of the industrial revolution but also the memories I have as a child,” Burton said backstage, noting that her father had one cherished pin-striped suit. “We thought of the skill that goes into making these fabrics. It’s man and machine working together,” she offered, noting that much of the work remains by hand, including the threading of needle-like instruments called heddles. “I love nature [inspirations], but nature is very much escapism,” she said. “I wanted this to be very much grounded in reality. I wanted it to be [about] where I’m from and where we belong in the world and where we feel at home. There’s an honesty about these mills.”

It all provided a framework for Burton’s focus on tailoring in an exquisite collection that pulsed with artful tension while retaining an underlying commercial savvy, without a trace of bourgeois rumination. Burton started from her beloved baseline of British tailoring, romancing the look while keeping it real. She opened with a perfect, strong-shouldered pantsuit, classic but for the addition to the jacket of a half-skirt on the bias, made from the selvage end of the fabric, marked “Made in England.” (Burton pointed out that the tag inside reads “Made in Italy.”) She worked other jackets for asymmetric interest, draped or elongated on one side, some incorporating multiple men’s wear fabrics. That tailoring-plus construct carried into evening with numerous tuxedos transported from merely beautiful to special by intricacies of cut. One had a taffeta hem frill and diagonal lace insets set off by hook-and-eye borders; another, slashed shoulders and a taffeta “exploded rose” on one side. Coats featured similar flourish, such as the beauty cut from an oversize Prince of Wales check and embroidered from the hips down with 3-D rosettes made from scraps left on the mill floor. “I like the idea of things not being throwaway,” Burton said.

For the collection’s overtly feminine side, Burton drew inspiration from multiple sources connected to the north of England — rose festivals, the Brontes, suffragette Emmeline Pankhurst, who lived in the region, and the mills. Burton used humble white poplin for a full-skirted shirtdress, and interrupted the ottoman stitching of a body-con knit dress with insets of “floating threads” inspired by the configuration of a fabric looms. Another specific mill reference: an off-beat silvery number embroidered all over with long sequins inspired by those heddle needles. They shook when the model walked, creating shimmer and a cheeky sound effect.

As for the roses, Burton rethought that familiar fashion trope in exploded prints, abstracted sometimes beyond recognition. And a couturier at heart, she worked a series of dresses into lavish expressions of haute sensibility and skill, bounties of silk taffeta all pouffed, puffed, and gathered to insinuate roses in full bloom. While their extravagance nodded toward the Eighties, they emanated more directly from a place of pure wonder. They were masterpieces.