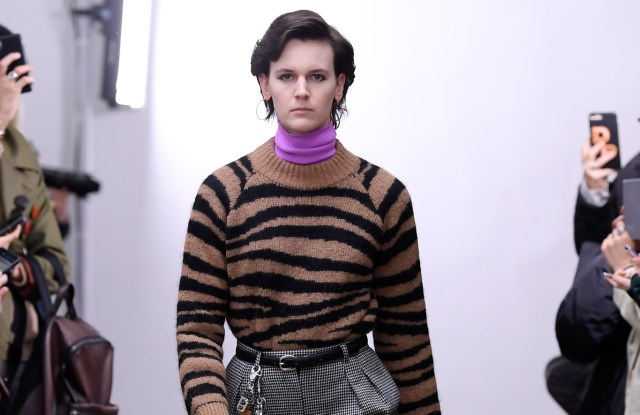 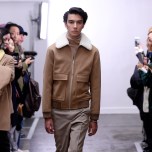 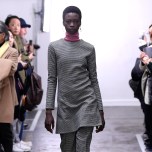 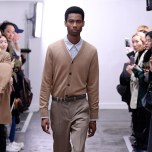 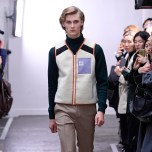 Jean Touitou was not after a revolution. For fall, he took the label back to the headquarters on Rue Madame, snarling traffic in the sleepy Left Bank neighborhood. Perched on a stepladder, he explained to the crowd he thought there was no better place for the show than home.

With that, he filed away last season’s roving spotlights and greased lightning vibes — they had been shown at a vast garage across town.

The label operates on the premise that there’s room, amid the hubbub, for quiet consistency, holding the same ground rather than chasing trends — the approach has kept it afloat for three decades. Smart, with a European sensibility; familiar, but not folksy.

So the Touitous — Jean and Judith — stuck to the basics for this coed lineup. Outerwear included snug wool bomber jackets with fleece collars and a smattering of three-quarter-length coats, mostly businesslike, in houndstooth fabric or gray wool. Hoodies, a jean vest and a leathery boiler suit were the livelier pieces among the flannel shirts and cardigans. Long, silky dresses were back, buttoned up and patterned.

Hunkering down on the home front didn’t mean shunning outside talent, though, and Touitou had three projects to report — he prefers to call them “interactions.” Kid Cudi T-shirts and sneakers are already in stores; in the fall will be items stamped by the California streetwear brand Brain Dead — including the A.P.C. denim jacket printed with musings about the body cracking under the strain of overstimulation, and in July, pieces from stylist Suzanne Koller, including a hooded, khaki parka — one of her “obvious classics.”

Recalling a time when his generation was seeking a revolution, Touitou noted it can be harder to keep things together.

“Some of us then…realized that our task was even greater, our task is to prevent the world from falling apart — that’s a tougher job,” he said.