Demna Gvasalia tackled the mythic Parisian, and his take was fierce, with a chic as pungent as the tar smell wafting from the asphalt floor. 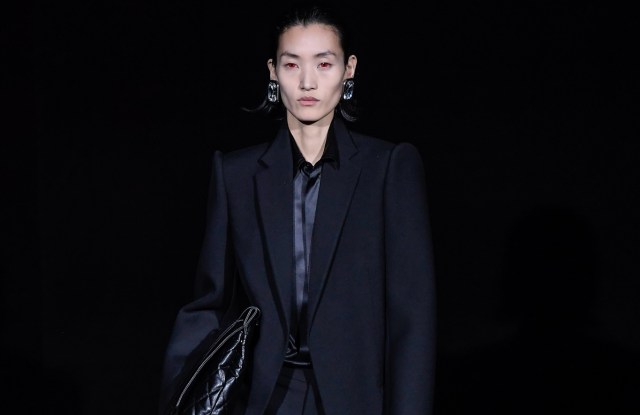 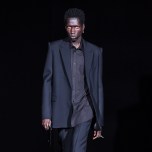 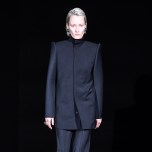 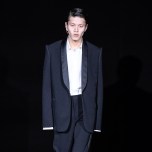 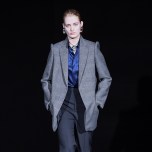 Draining collections of seasonal themes and narratives was one of the big ideas Demna Gvasalia brought to fashion, and to Balenciaga. He gave that the heave-ho for fall, and poured a vast field of fragrant asphalt upon which to parade his vision of “the real Parisian of today.” The stark set and dim, flickering lighting did not obscure the rush of bold, thrilling fashion that whisked past, almost brushing the knees of guests.

Gvasalia also let go most of the streetwear claptraps he’s been stereotyped with to focus mostly on tailoring, and the precision silhouettes Cristóbal Balenciaga pioneered, including cocoons, babydolls and semifit shapes. “The house has had such a long story, but my job is basically to modernize it and to make it appealing to the customer that we have today,” he said backstage.

Announcing his Parisian theme ahead of time in an expansive WWD interview was also something new for the designer — and prescient, given the return of bourgeois Gallic chic gaining momentum in the French capital.

His take was raw, and emitted a hard edge as pungent as the tar smell wafting from the floor. For Gvasalia, Paris is not the mythic fashion city represented in arch couture photos of the Fifties and Sixties, but a buzzing metropolis, with helpings of grit and fierceness. “Patterns and shapes emblemize common daily activities — grocery shopping, commuting via motorbike, and going out after work,” the show notes dryly enumerated.

Gvasalia reinforced his claim on oversize shapes, proposing enveloping cocoon puffers, sumptuous kimonos and beefy belted shearlings for her; fridge-size, camel top coats and boxy, gray pea jackets for him. The collection was pared back yet compelling, with most of the volume plays centered on the shoulders. Exaggerated sleeve heads via 3-D molding elaborated on a very Margiela idea, while pitching the yoke and sleeves forward and tacking them along the collarbone looked entirely new, and gave a cool rounded shape, like a penumbra. He applied this to puffers and pea coats for men; and sleek trench coats for women.

Slimmer shapes were extra long; collars extra high; and were rendered in voluptuous fabrics and fetching colors, culminating with fluted neon coats in moire silk. The designer’s wry humor came through with spikey Eiffel Tower rings, souvenir-shop prints and brown-paper grocery bag shapes done in leather and stamped with a logo resembling the one for “bio,” or organic, products in France. Funny, too, were the funnel-shaped evening tops and party dresses with a hoop hovering around the shoulders, evoking Pierre Cardin.

The show was far longer than usual, reflecting a third innovation: Gvasalia is dispensing with pre-collections and made this his mega statement straddling winter and spring, while maintaining multiple delivery windows. It felt like he also relished the opportunity to express in an expansive way his affection for the French capital, having relocated to Zurich last year where his signature brand, Vetements, is now based. “By moving away, I kind of fell in love again with Paris,” he mused.