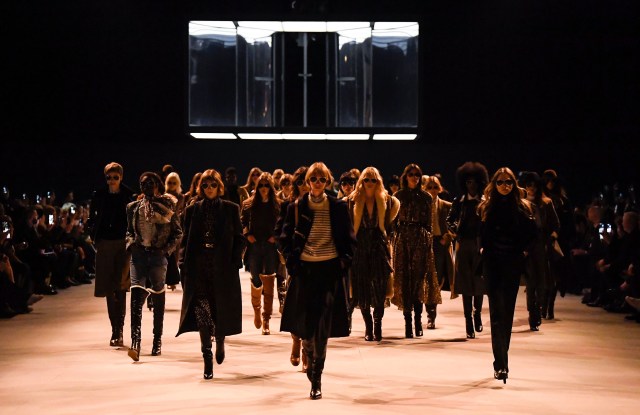 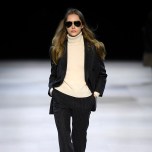 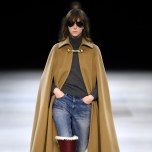 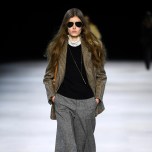 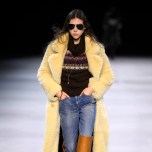 Hedi Slimane’s Saint Laurent has left the building. And with it, the strung-out or merely pouty disaffected youth who formed the core of his work for that house. She crossed over to Celine with him, a little less angry, but similarly attired — short, tight, black and, when she lost the gray cloud, trashy-sexy. She’s now gone, and good riddance.

On Saturday night, Slimane introduced Celine’s new woman, and she is a woman — chic, knowing and a direct descendant of a particular stylish archetype of years past. In a little fashion irony, Slimane always installs a modernist set. This time, his first model descended from on high in a big light box, emerging onto the runway in all her retro glory. Her look: the sort of confident, sporty élan that ruled bourgeois Parisian style, and emanated well beyond that sphere, in that well-dressed period from the mid-Seventies into the Eighties, before the latter decade turned hideous. The aura travels well, across time and through modern life.

As usual, Slimane employed a laser-sharp focus. His primary message: a great, often mannish jacket atop an easy skirt or some variation of culottes, some full enough to be called, in the language of old, a split skirt, others streamlined into walking shorts. There were also pretty waisted dresses in unfussy prints, including the classic Celine chain motif. Apart from the silks, the fabrics were substantial as befits traditional autumn dressing, often from men’s wear, and the palette, neutral with touches of golden glitz.

It all looked very strong and very Celine. Slimane clearly immersed himself in the house archive, where he discovered a new comfort zone, one light years away from the tawdry cool of his recent creative past. Familiar though the look was in a historical sense, Slimane made it feel fresh (even if the show ran a bit long). One could imagine his models walking out into the street, their casual polish calculated to be noticed while projecting an off-handed attitude.

The message was straightforward and in its way simple — jacket, blouse, skirt, dress that works under a jacket and, for the wardrobe’s sake, a pair of jeans, all finished with a reasonably sized shoulder bag with logo hardware and a high boot, whether heel or wedge.

This is where Slimane’s consistency from his Saint Laurent days showed through. Some designers need relentless merchandisers to translate their runway collections. For some merchandisers, it’s a grueling task. Slimane is himself a brilliant merchandiser, probably one of the most commercially savvy designers working today. Rather than declining runway for reality, he works in the reverse, reshaping reality for the runway. As shown, this was a collection that, item by item, is full-on retail-ready with a wealth of impressive items. Will it play as well as the work from his Saint Laurent past? Here’s hoping. The world could use a dose of bourgeois chic.