Natacha Ramsay-Levi's collection was a gallop through the everyday wardrobe needs of today's heroines, starring equestrian tailoring bent to a woman’s will. 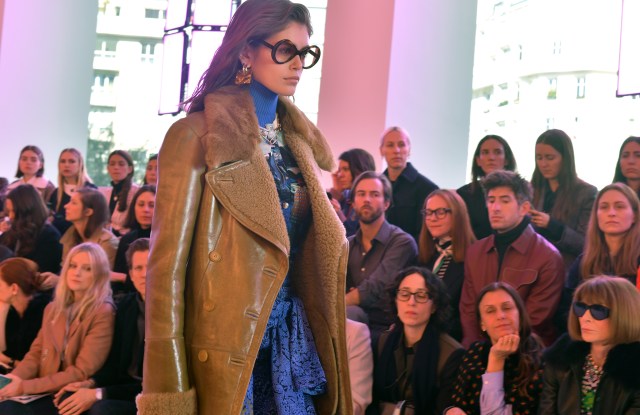 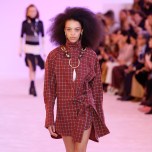 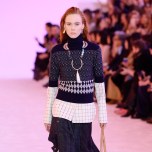 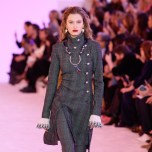 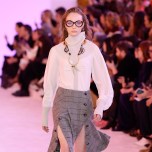 “Through Karl [Lagerfeld] is how I’ve known Chloé since I was a child,” said Natacha Ramsay-Levi, who selected six archival photographs and quotes representing the dearly departed designer’s 25 years at the brand and had them printed on postcards as mementos for every guest at Thursday morning’s show. “The clothes joined the personality of the woman rather than taking all the personality of a woman,” she said in praising Lagerfeld’s work, which was unstructured, weightless and totally feminine — albeit of a different time. Her fall 2019 collection was less romantic romp than full gallop through the everyday wardrobe needs of today’s active women, featuring equestrian tailoring bent to a woman’s will. Chic without screaming so, it was all about wearability with considered details.

Take the Prince of Wales check riding coat as an example, in a stretch wool crepe beautifully ruched to fit the waist, fastened at the side with a long row of polished silver buttons, and worn with cropped flared trousers for a new take on the suit. Or consider the burgundy check wool minidress with a wrap effect at the hip. Both are examples of the soft French touch she brought to traditionally rugged Highlands fabrics. A gray window-pane check kilt was slit on either side and topped with one of Chloé’s signature feminine blouses that had ribbed knit cuffs for an added comfort factor. Fall’s clunky ankle boots also came with clever ribbed knit sock cuffs.

Ramsay-Levi also said she was feeling inspired by the pioneering female French sailor Florence Arthaud braving the wild, so there were lots of nautical knits, including a rust funnel neck cardigan, shaped to the waist, over a moss green military skirt with patch pockets. A funnel neck, camel hair cape also looked particularly covetable (she reined in the volume for city living), as did the season’s must have talisman, a horseshoe pendant necklace with goat hair and shark tooth charms.

Adding elements of romance were Highlands landscape toile de Jouy minidresses, and a T-shirt picturing a happy couple walking in a winter seascape. If there was a weak spot, it was a few of the dresses, in dreary color combinations of devoré velvet, or floral patterned silk georgette, that could have had a bit more oomph. She made for it in the end, though, with a navy blue minidress jangling silver embroideries like lucky charms. Borrowing a Lagerfeld phrase from 1977 to describe it, it was a dress “to transform everyday life into a fairy tale.”