Beneath the threatening rubber armor and executioner’s hoods, one could discern the baseline of real clothes in the latest renditions of Rei Kawakubo's brilliantly inventive shapes and materials mixes. 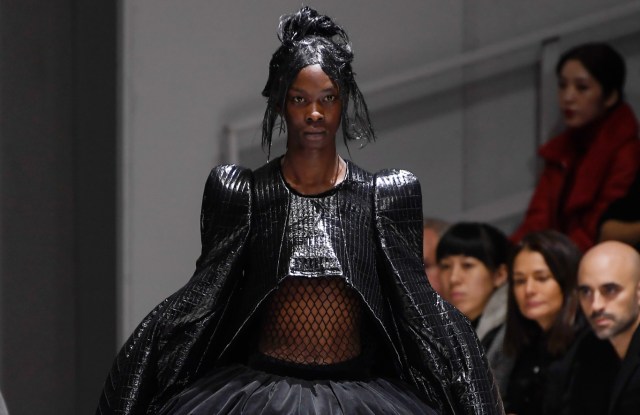 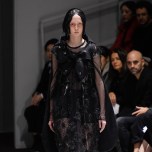 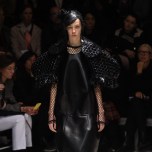 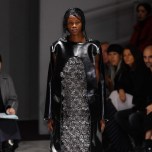 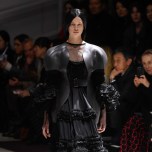 Last season, Rei Kawakubo famously announced a change of direction, a calculated shift away from her conceptual forays to “the point where the clothes become abstract,” she wrote in a bold manifesto. She thus found herself “fumbling around in the dark.”

For fall, Kawakubo certainly didn’t fumble (does she ever?), but neither did she come out of the dark. In a return to her cryptic one-liner show notes, she proffered her theme: “The Gathering of Shadows.” Its description: “Many small shadows come together to make one powerful thing.”

The meaning of that one proved tough to distill. What was very clear: Kawakubo’s disquiet with something — the state of fashion, or more likely, the state of the world. That the clothes were mostly black is hardly unusual; the lady has often taken the road more noir. But here, a relentlessly ominous mood cloaked the runway, and built toward a startling finale. At one point, a happy, sing-songy rendition of “All Things Bright and Beautiful” came on the soundtrack, but it quickly transitioned to a harsh, dissonant version, along with sounds of warfare and pounding rain. Then the black-clad models came out for the finale, forming a circle in the center of the floor. They looked like a coven of style-conscious witches in ceremonial rapture.

Unsettling, absolutely. But then, fashion has long had its dark side, often resulting in impressive clothes. Despite last season’s declaration, what Kawakubo presented here was plenty high-concept. Yet beneath the threatening rubber armor and executioner’s hoods, one could discern the baseline of real clothes in the latest renditions of her brilliantly inventive shapes and materials mixes. In fact, some pieces could even be called pretty, particularly the dresses in 3-D florals, the Victorian mourning ruffles and a shirt-skirt of a Marie Antoinette pannier. And there was a charm to the interludes of violet velvet and tartan worked for punk flamboyance.

But pretty and charming were hardly the intended message, and the only powerful thing that seemed to have coalesced from Kawakubo’s various shadows was that unrelenting darkness. But then, at the end of the disquieting finale, the women suddenly raised their heads as they stood in that closely bonded circle, and looked into the light above. Let’s hope they saw hope for the future. At least a glimmer.