Artic white was the predominant tone of Yolanda Zobel's second collection for Courrèges, set in the igloo-like cupola of the Espace Niemeyer. 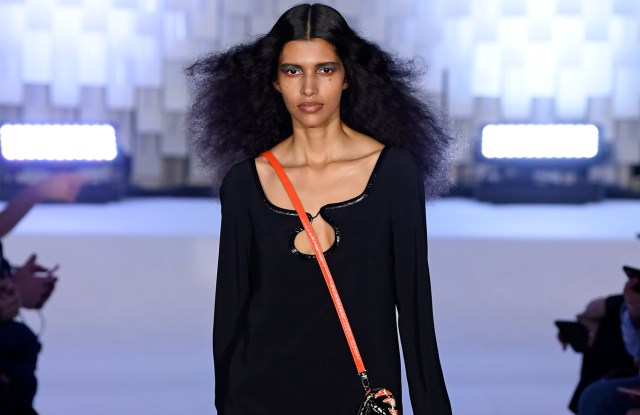 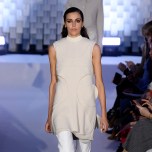 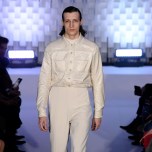 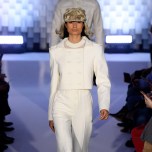 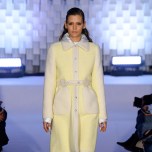 While the thermometer was hitting 18 degrees Celsius in Paris, it got decidedly chillier inside the venue for the Courrèges fall 2019 show.

Showcased under the igloo-like cupola of the Espace Niemeyer, the headquarters of the French communist party, half of Yolanda Zobel’s second collection for the brand was done in arctic white.

“I personally wear a lot of white in winter, and it’s a color that is embedded in the house of Courrèges,” said the German designer, who took over creative direction of the brand owned by Artémis, the family holding company of French billionaire businessman François Pinault, in February 2018.

Choosing such a symbolic color made the looks a little reverential: simple Sixties coats and shift dresses felt too literal — the overblown Twiggy-esque false eyelashes worn by some of the models didn’t help — even if the dresses had cutout circular figures that floated with each of the models’ steps, adding movement. Accents of silver, white shearling and flat leather boots reinforced the arctic vibe, while the stronger looks were outerwear: a cropped jacket in silver leather and shearling looked current, while white fluffy sleeves on a pristine tent-like down jacket added a welcome softness.

After a rather unfortunate interlude of manic dancing by four models — including Lily McMenamy cackling and whipping her long hair as she ran along the catwalk — the white tones shifted to black, brown, rust and red while a parade of reworked Courrèges jackets was shown on both male and female models, paired either with dark denim or wool trousers.

Vinyl from the brand’s archive — as of her arrival at the brand, Yobel vowed to reuse plastic for her silhouettes — was turned into contrasting white trims on a cool black and orange coat, or black trims on a cozy shearling jacket. Pops of red and cloud-shaped prints by French artist Vava Dudu spiced up the second part of the collection, without which it would have fallen flat.

Zobel is still pondering the answer to the question that guides her direction at Courrèges — “What is futuristic today?” — but suffice to say that if global warming reverses, she has plenty of coats to offer.