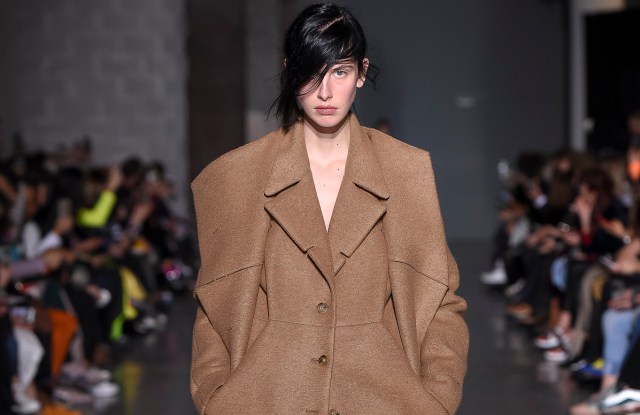 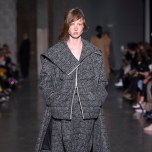 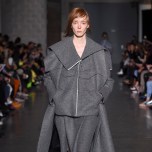 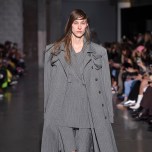 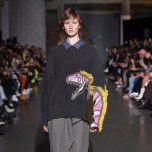 If Dawei Sun was nervous ahead of the first runway show of his namesake label, he didn’t let on.

Describing his mood backstage, amid the flurry of last-minute primping, his words were, “happy, relaxed, calm, breathing — not feeling the stress.” Delivered in an unhurried, business-like manner, it was time — a message also conveyed through the sophisticated tailoring of the lineup that followed.

The bow was a source of some concern. “I’m stressed about heading out,” to address the audience, he noted.

Preceding his own, brief appearance on the catwalk, the collection proved to be a confident display of complex design techniques. Sun draws on the A-line shape, which he tries to offset by introducing masculine elements, constructing and deconstructing silhouettes, adding layers and folds along the way. One of the more elaborate looks, made from a crinkly, ultra light fabric, had a series of pleated folds — six of them — running across the front, from a shoulder down to the waist, before splitting open. Other outfits were built to look as if a coat had been tossed off the shoulders, left hanging unfolded across the back to reveal a logo tag. Fabrics ranged from thick, luxury wool twills to breezier white-and-blue striped poplins, as well as the creased, paper-light material.

Playful dinosaur images popped up on occasion, their toothy grins knit into sweaters, and so did some claw marks, which turned into loose tassels that hung off one side of a sweater. The explanation backstage was that while everyone’s scared of dinosaurs — or people with a feisty exterior — really, they’re not scarier than a cat, which is soft underneath.

There’s a lush puffer jacket offer on the market these days, but it is hard to imagine there could be a cozier option out there than Dawei’s — his wrapped around the body like a blanket.

From the handsome, camel coat that opened the show to his quick runway bow, this was a confident debut for a former Cacharel designer who has sharpened his skills in the workshops of several top French luxury houses.