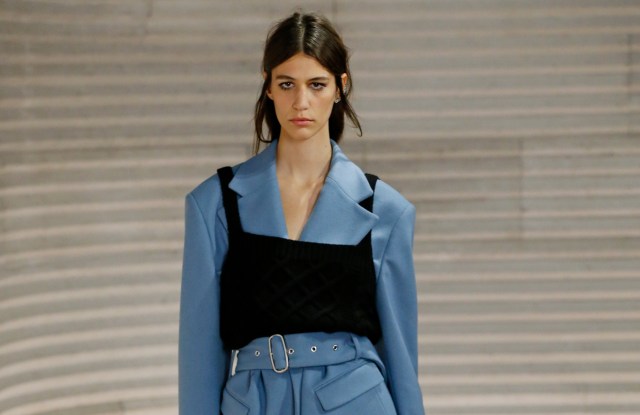 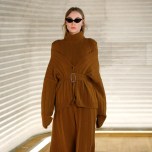 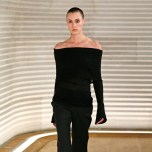 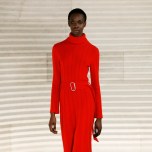 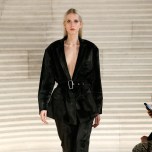 Winter tones definitely suit the Parisian collective’s reworked tailoring silhouettes. Marking a clear departure from last season’s punchy looks, Each Other’s fall 2019 collection continued the brand’s exploration of the work of John Lautner, which was already on the mood board for pre-fall.

The American architect’s futurist lines were reworked onto belt buckles on cinched suits and vegan leather skirts and jackets — the brand went entirely vegan for the first time this season, opting for pineapple fiber instead of leather and embossed velvet palatine to re-create astrakhan.

The looks were heavily Seventies, with strong shoulders on jackets and knitted flares. There were flashes of skin: a sky blue suit featured buttoned shoulders — on the model, one of them was left undone — while knit dresses and white shirts had oval openings on their front. Extra-cropped wool jumpers were fun touches: in contrasting shades, they stopped just above the décolleté and created the impression of a bustier underneath.

“We call it a resculpted wardrobe, fit for a woman looking for empowering clothes,” said Jenny Mannerheim, the label’s cofounder. The show was introduced by a performance by model Lorelle Rayner, who sang a version of Alphaville’s “Big in Japan” before hitting the runway. “We chose her to make a point: modeling is her job, but she also has talent.”