As "gilets jaunes" protests snarled Paris yet again, the Lebanese designer showed a collection that was all about "the power of love." 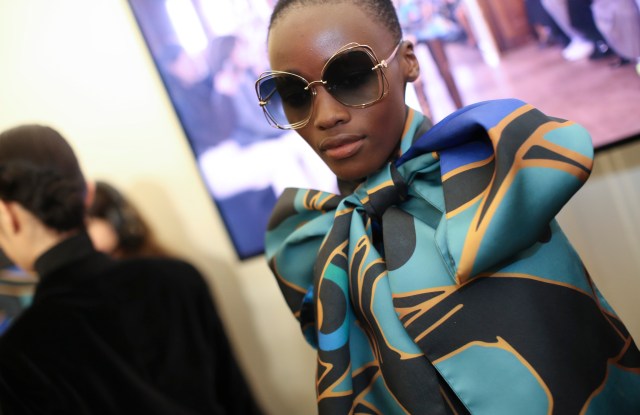 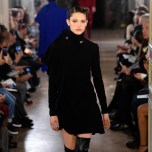 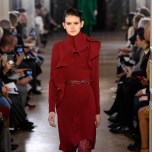 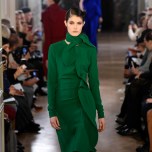 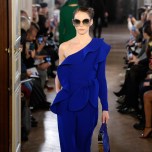 Guests heading to Elie Saab’s fall show in Paris had a feeling of déjà vu, as demonstrations by the “gilets jaunes” antigovernment protesters put large sections of Paris on lockdown for the 16th time in fewer than four months.

“It’s really very difficult. Honestly, we don’t like to see Paris like this, because Lebanese people love Paris,” Saab said backstage, as he personally put the finishing touches on the opening looks. “We don’t want this for Paris because we care for this city — it’s like a second home.”

But the show must go on, even as designers struggle with late deliveries and guests negotiate roadblocks sealing off large swaths of the city center. Saab kicked off with a series of thigh-grazing dresses with sculpted ruffles that channeled an Eighties glamour that felt almost minimal, by his standards.

He rapidly corrected course, sending out dresses, jackets and coats printed with a bold pattern of hands, hearts and eyes. The motif also appeared in gold-edged sequins on a bodysuit paired with a sheer skirt dotted with little black sequined hearts.

If that print felt a little busy at times, there were always the super chic, plain velvet tuxedos. A black version came with an exaggerated wrinkled taffeta sash tied into a bow at the waist. The sculptural fabric also made an appearance on a sweeping, deep green ballgown with poufy balloon sleeves.

The other big story was capes. A sequined green tuxedo came with a matching short pleated cape that brought to mind a superhero outfit, if you’re into that sort of thing. A more compelling version was the slim train that extended from one shoulder on a flawless sequined black evening gown.

Saab said the inspiration for the show was “the power of love.” Or as wishful thinkers in the audience might say: give peace a chance.