With its mix of florals and masculine elements, the show was an ode to the “indiscreet charm of a kind of bourgeoisie,” Valli said. 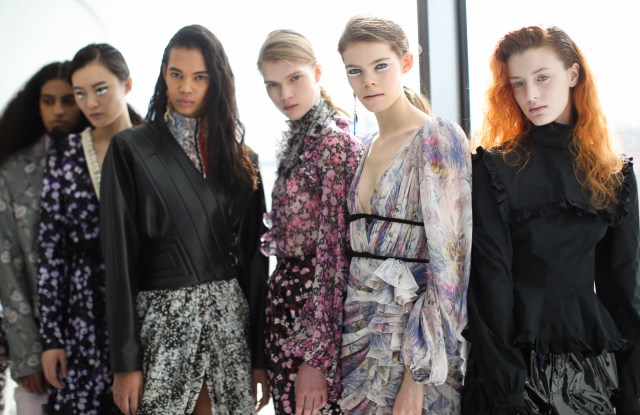 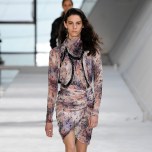 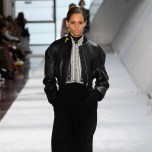 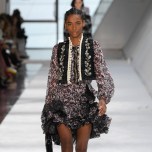 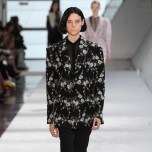 After taking a spin through Morocco and India in his last two collections, Giambattista Valli’s woman was back in Paris this season. In fact, his delicate palette of grays and lilacs was lifted straight from the city’s faded zinc rooftops.

But Valli is a garden guy at heart, so he also went looking for botanical inspiration. On his mood board for fall were images of Claude Monet’s oasis at Giverny, as well as the “voyeuristic and sensual” fashion photographs of Guy Bourdin — what Valli, in a wink to Luis Buñuel, dubbed the “indiscreet charm of a kind of bourgeoisie.”

Picture speckled Impressionistic florals paired with boyfriend suit jackets, biker gear and kinky boots in slick black patent leather trimmed with rows of buckled straps. There was an almost abstract quality to the pastel motifs, rendered in techniques ranging from print to embroidered lace and tulle.

Valli worked them into featherlight cocktail dresses with tulip wrap skirts, and frothy evening gowns with long trains that were cut away in front to expose plenty of leg. He threw in assorted travel souvenirs, like a Moroccan-style pom-pom waistcoat, or neckerchiefs trimmed with a small curtain of bugle beads.

There was a futuristic slant to the cropped jackets, including a white leather style with biker zips and an aviator fur collar. A quilted black leather wrapover jacket formed a V-shaped neckline, though Valli did not cross into overt branding — after all, Valentino and Vuitton have already laid claim to that letter of the alphabet.

Instead, he showed a beefed-up assortment of handbags, the latest evidence of his expansion under his partnership with Groupe Artémis, the Pinault family’s investment arm. They included the Flore, a capacious style with twin locks that Valli pictured on an oh-so-French pedestal: sitting next to its owner on its own chair at a café.