"When aristocracy started to meet street culture,” was the inspiration for Clare Waight Keller's collection of feminine tailoring and plissé floral dresses injected with sporty touches. 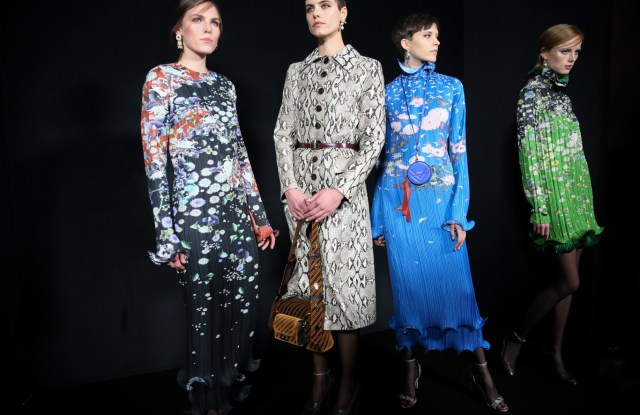 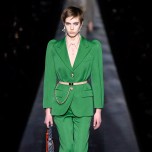 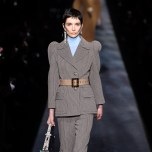 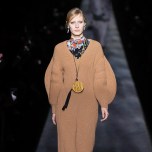 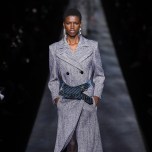 A clear tent under moonlit trees in the Jardin des Plantes undoubtedly held appeal for Givenchy’s “Winter of Eden”-themed fashion show. But maybe think twice before cramming 1,000 people in a space the length of a city block with only one way out through a dark tunnel of dizzying lights and pounding club beats?

The unpleasant exit didn’t feel particularly on-brand for Clare Waight Keller, designer to the Duchess of Sussex, no matter how much she has been exploring the darker side of the fairy tale in such pieces as the spectacular sinister-sweet red latex spring 2019 couture gown worn by Rachel Weisz to the Oscars.

But Waight Keller wanted a club vibe to go with her early Nineties inspiration, when “aristocracy started to meet street culture,” she said backstage before the show, citing society types like Honor Fraser and Stella Tennant who became fixtures on the London nightlife scene, and also the “bourgeois” look that has been sweeping the runways here.

Design-wise, it all started as it always does at Waight Keller’s Givenchy, with structured tailoring — but more specifically than that, the shoulder, which has been a playground for designers this season (see Saint Laurent, Chloé and Balenciaga). She proposed several options: round, peaked and oversize-angular in the grand Nineties tradition, making them the foundations for the suits and coats that were the collection’s strongest propositions, some worn with puffer jackets on top for an injection of circa 2019 sport.

The first three looks, a camel coat, poison green pantsuit and putty-colored version — belted at the waist and with softly sculpted round shoulders delicately pinched like the edges of a biscuit — managed to communicate a uniquely female power, not discounting the fact that they were also cut with enough room to let a woman eat lunch. Sharpness came later, with a pair of covetable black tuxedos; one in the classic style with satin lapels, worn over a pink floral plissé silk turtleneck with lettuce edges peeking out from jacket cuffs; another with one lapel crystal-embroidered and a glam that had Cate Blanchett’s name all over it.

Long, floral stretch plissé dresses were standouts, even if some of them bunched unflatteringly at stick-thin models’ middles. (She used 18 different botanical prints and fishing wire to bring structure to the edges, she said backstage.) A glossy pink floral version with a single sleeve and ruffles rounding the neckline was lovely, and the effect of layering a boxy, mannish cropped gray tweed jacket over a plissé gray tweed skirt and pants made for a cool contrast of hard and soft.

For evening, she brought sculptural couture-like shapes down to earth by rendering them in sporty nylon taffeta: a navy blue balloon sleeve off-shoulder top paired with black trousers had an urban edge, and a cocktail frock with enormous sculptural sleeves in peach taffeta nylon an approachable realness. Flowing parachute gowns in the fabric fell a bit limp, though.

Not forgetting the temptation of a special black dress, she offered several: one a short, caped style with weeping willow crystal embroidery at the shoulders; another a conservative looking number the Duchess would love with puffed long sleeves, pronounced waist and full skirt as the canvas for a silver body chain dangling jewels and charms for a look that was pure Waight Keller — femme-meets-fetish.