With added fluidity, René made a more convincing case for dressing up. 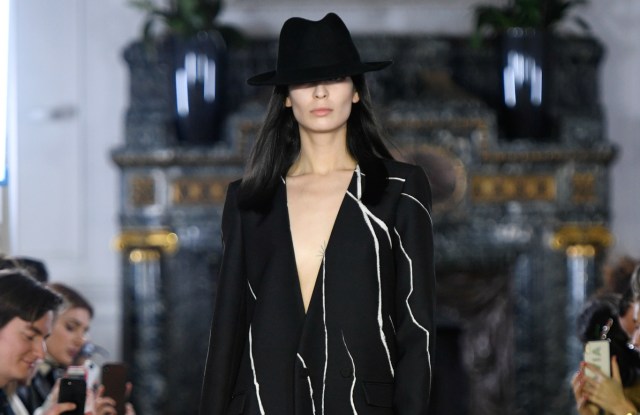 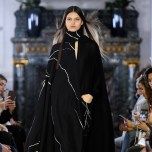 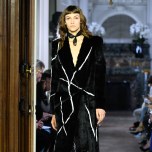 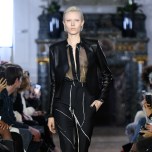 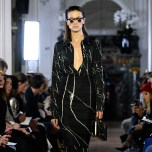 Without abandoning his appetite for a little drama, Richard René brought Guy Laroche into smoother territory for fall, adding a bit of flow to his ultrafancy, ultrasexy lineup — black, all of it, with jagged veins of white shooting through the garments.

Black marble was the theme, discovered, not in a luxury store remodel, but at the tomb of Guy Laroche — which René applied both literally, and liberally, down to the tips of the very high-heeled shoes. The branches of white veins were drawn in crystals, woven into jersey knits and even printed on hosiery. The most dramatic look — grabbed by René to accompany him on the victory lap at the end of the show — was a slim, floor-sweeping dress that stretched up to the neck, its head-to-toe slit in the form of a vein that wound down the body, with crystal-encrusted edges. Completing the look, the model wore big, round Sixties-flavored sunglasses, her hair coiffed in a chic, feathery mullet.

The accessories thrust included sunglasses with tiny round lenses, stuck to a severe-looking, eyebrow-covering bar as well as ultrathin and elongated satchel-like handbags with hard angles.

Capes added softness, a shield, too, that offset a good deal of exposed skin and offered a relaxed contrast to the geometrically cut shapes that dominated the collection. Veering slightly romantic for a brief moment, the designer also sent out a full, airy skirt, which he paired with a sheer blouse.

With a collection that felt less stilted than last season, René is making a stronger case for dressing up — a welcome development for a house that has struggled, over a succession of designers, to find the right register.