If this was “kawaii,” as the show notes suggested, then it flirted with the Japanese sub-culture’s dark offshoot, yami kawaii, or sick-cute. 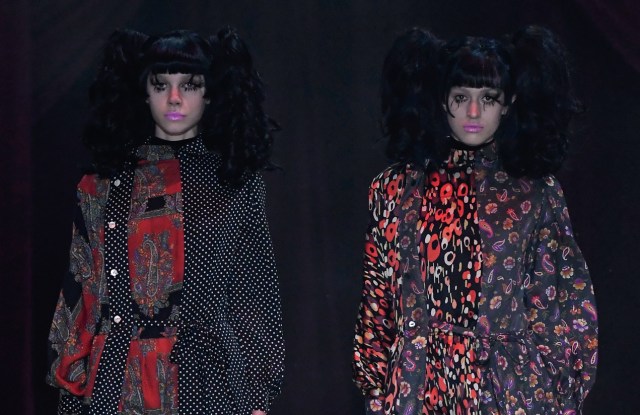 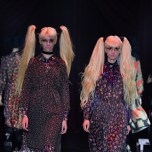 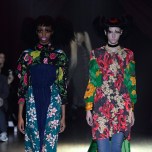 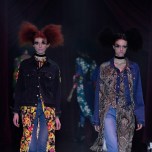 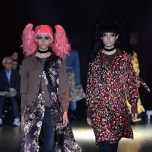 Junya Watanabe, cute? The designer known for his punk aesthetic teased a drastic conversion with his show invitation, which featured a pink anime girl wearing a rose eyepatch. Look closer at the background mosaic, however, and there was a sorry-looking teddy bear with stuffing spilling out of its gashed head.

Models with high pigtails and airborne fake eyelashes walked out two-by-two into the Salle Wagram venue that was once a gilded 19th-century ballroom, their mismatched twin outfits echoing stages of deconstruction — as if Watanabe had rifled through thrift store racks and performed quick-change surgery on the contents.

Despite their casual allure, his hybrid creations were spliced together with great precision. A pleated dress in a tame lilac floral print fused with a white biker jacket, while a Fifties-style sequined-embroidered mohair cardigan morphed into a paisley-printed robe.

Among the coolest combinations were the UCLA sweatshirts grafted onto dowdy floral print dresses, and a pair of odd-couple cardigans: think one half gray Fair Isle knit, the other glossy black chenille.

Sometimes, only a sliver of the original garment remained. A beige trench coat collar sprouted from a patchwork coat with a hem of black Harajuku girl ruffles, while the skeleton of a parka provided the frame for a baby-doll dress, worn over shredded black jeans and cropped cowboy boots with spikes protruding from the heels.

If this was “kawaii,” as the one-word show notes suggested, then it flirted with the Japanese sub-culture’s darker offshoot, yami kawaii, or sick-cute. It inspired some stellar work by hairstylist Kiyoko Odo and makeup artist Isamaya Ffrench, who blended jagged black fringes with streaks of black eyeliner to moody effect.

If the outfits could slot right into the wardrobe of an iconoclast like Grimes, whose swirling vocals punctuated the soundtrack, they might gradually creep into the boardroom, if Watanabe’s suit-jacket-and-vintage-dress combos were an indication. Who says grown-ups need to tame their rebel yell?