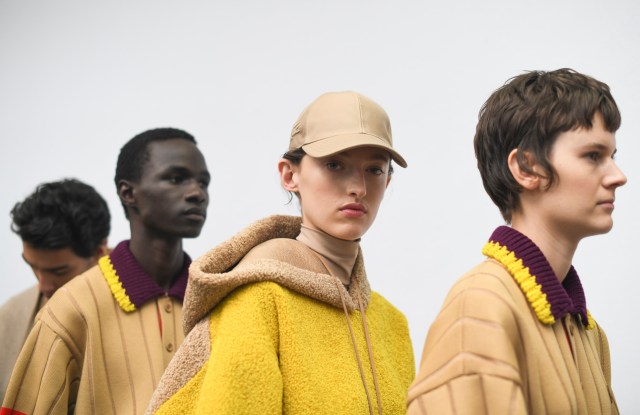 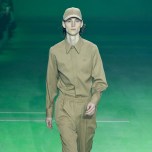 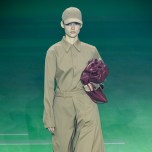 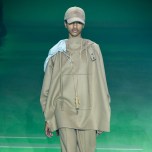 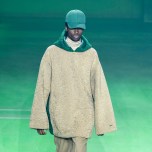 With all the camel and masculine, boxy shapes, Louise Trotter’s imprint came through loud and clear in this cool, modern, coed collection marking her first effort for Lacoste.

The opening look, “the René coat,” with green lining under the collars and, inside, a herringbone inspired by the hard-wearing material used on the first tennis shoe Lacoste designed, paid direct tribute to the house founder’s double-breasted tailored coat. All the covered necks, meanwhile — with turtlenecks layered under shirts and even the cotton piqué polos — were a nod to his hypochondriac nature, Trotter explained during a preview of the collection.

But it never felt vintage or nostalgic, with the designer instead looking to interpret what he would have been doing today.

The mood was sporty but in an urban, sartorial way, both crisp and easy, relaxed and dressy, channeling Lacoste’s sense of elegance, with a uniform feel coming through. Trotter revisited the traditional track pant in a technical Japanese wool, for instance, while the classic parka was reworked into a flowing skirt and top.

Graphic flashes of color interrupted the clay, beige and sandy stones, gaining traction as the show progressed, with the designer playing with colorblocking and patchworking on looks. One of the polo shirtdresses, for instance, fused a pleated “tennis whites” skirt with a sweater with sporty stripes at the neck, its high chunky collar and cuffs in a different knit.

Adding a crafty touch was the chunky knitwear, including a spin on the tennis sweater with asymmetric contrasting stripes edging the V-neck and threads streaming from its crocodile motif, with among other details the colored knitted collars on polo looks. The house mascot was also revisited in a fun clutch, while another white version of the polo extended into a dress sported an allover print made up of the entire family of crocodiles from across the brand’s history.

It marked a solid debut for the designer, and a stronger fashion direction for the house. What remains to be seen is how it translates in the stores.