Citing "the beauty of controversy," Nicolas Ghesquière built a replica of the Centre Pompidou inside the Louvre for his eclectic collection. 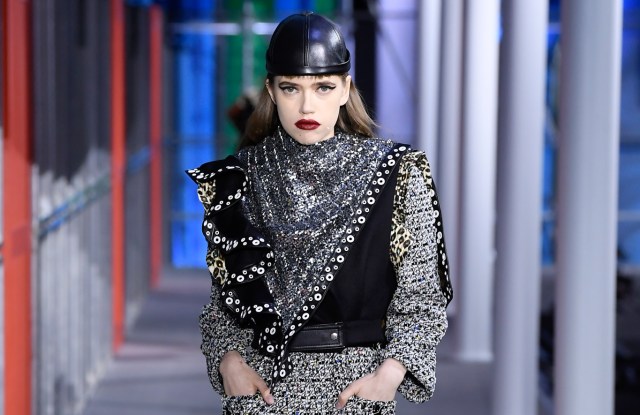 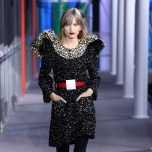 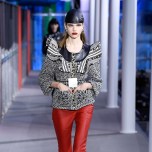 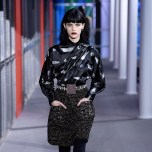 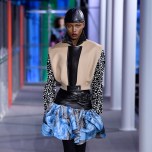 Since Nicolas Ghesquière presented his debut collection for Louis Vuitton inside the Louvre’s Cour Carrée in 2014, he has often used the historic museum as a backdrop for spectacular sets with a futuristic bent.

On Tuesday evening, guests arrived at the venue to discover a reproduction of another Paris art institution, the Centre Pompidou, built by architects Renzo Piano and Richard Rogers, in a groundbreaking style that caused an uproar when it opened in 1977.

Why the world’s largest luxury brand would build a faithful copy of a structure that is only a mile away in real life was something of a mystery — one that Ghesquière cleared after the show: The collection was inspired by his people-watching at Café Beaubourg, which overlooks the vast square in front of the Pompidou.

The eclectic lineup drew on the tribes he spotted there. The fashion crowd was decked out in speckled tweed dresses that framed the neck with extravagant ruffles; the museum staff, in a blend of sharp tailoring and folkloric patchwork sleeveless coats; the former punks, still marching to a colorful New Wave beat, and even the street performers, with many of the models sporting leather Pierrot caps — although disciples of Marcel Marceau seem to be a dying species these days.

Citing “the beauty of controversy,” Ghesquière said his melting pot approach was intended as a sartorial equivalent of the Pompidou’s striking “inside-out” structure. The building’s exposed tubes in bright yellow, red, green and blue inspired his geometric knits and boldly patterned leather pieces with a hand-painted feel.

“It’s interesting to see that this building was so controversial at the time, and then with the gymnastic of the eye, it became something so iconic for the Parisian landscape,” he said. “It takes time sometimes to understand things, and I love that idea.”

Indeed, the variety in the collection felt overwhelming at times, as the eye jumped from Ghesquière’s familiar jutting shoulders and ballooning sleeves, to Eighties-style power suits, to a Cyndi Lauper-esque bustier dress dotted with silver stars and polka dots.

In that sense, it took its cue from the leather goods, which account for the lion’s share of revenues at Louis Vuitton and cover a wide range of aesthetics, from an egg-shaped bag in classic Monogram toile to a $30,000 crocodile leather Capucines, or a novelty clutch based on Grace Coddington’s cartoon sketches of her cats.

Having flirted with a prim bourgeois aesthetic this time last year, Ghesquière has been gradually edging back toward the more experimental end of his repertoire, as evidenced by the striking sharp-shouldered gown that brand ambassador Emma Stone wore to the Oscars.

“I am happy to be misunderstood sometimes,” the designer said, though he hoped his ideas would eventually be adopted. “You do clothes to be worn and not for just pictures,” he reasoned.