The show would be a bit dramatic, but the clothes more basic — for his world, anyway — cautioned the designer, before the show. 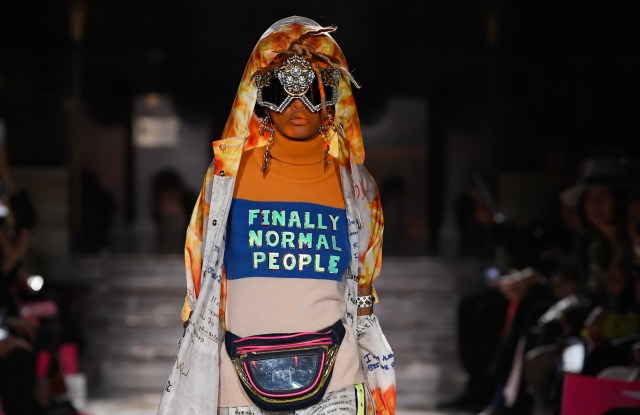 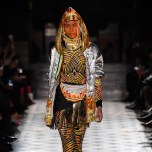 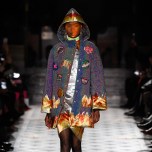 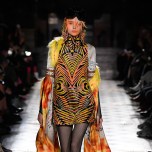 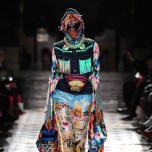 For fall, Manish Arora hit the festival circuit — Burning Man, what else? — and let it rip.

The first look was trimmed with flames, carried out on orange and white platform boots and topped with a sprig of dreadlocks that shot out of a rhinestone-embellished ski mask. Things got progressively crazier from there.

Speaking about the collection backstage before the show, Arora described it as “very personal,” reflecting experiences he’d been through himself, “spiritually, ‘festival-ly.’”

It would be a bit dramatic, show-wise, he cautioned, but the clothes a bit more basic — for his world, anyway.

With his eye on Hollywood’s red carpet and a foothold in China — five stores now — Arora is a modern-day showman who has flung the door wide open to the digital world. A hesitant label could learn a thing or two.

First off, 3-D is here to stay. Arora jumped on that bandwagon some seasons ago, with Instagrammable accessories such as purses in the shape of round emojis or cat heads — the eyes lit up. This season, the purse department included a VW van and an open-mouthed shark, but the bulk of the forms migrated to the head. There were huge feather headdresses, gazelle and unicorn horns, masks with blinking lights, and, topping off the show, a towering, arced headdress with sticks of burning incense — pushing experience into the olfactory realm, and recasting clothing as costume.

Sifting through the fevered lineup of wildly individual looks, one spotted some elegant, body-covering dresses — sequined, with tufts of feathers or otherwise embellished. Trousers were cut in all forms, poufy, then cinched at the bottom, or pencil thin, and the jean jackets mostly carried fringes.

References were all over the place, true to Arora form, ranging from unicorns and rainbow land to the rough-and-tumble Far West, with influences from Native Americans and India thrown into the mix.

“The collection has something for everyone,” Arora offered with a grin.