With a handbag slung over her wrist, and camouflage mary jane shoes on her feet, maybe, just maybe, Miu Miu’s glamour girls can save us after all. 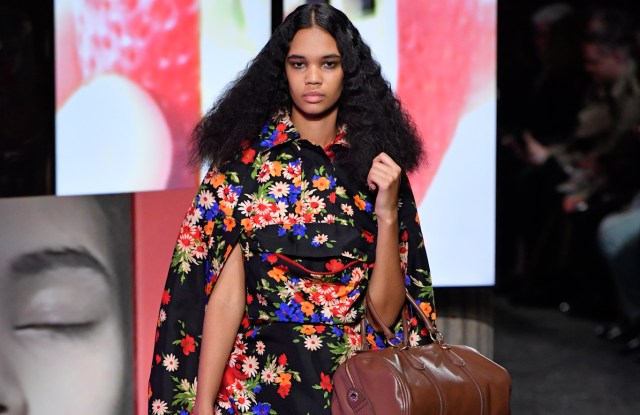 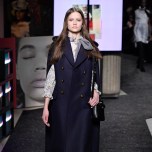 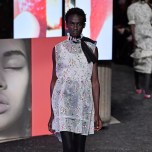 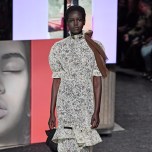 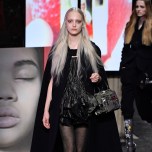 The world needs saving. So sayeth Miuccia Prada. Indeed, between the freakishly warm winter temperatures, the gilet jaunes protests, and the death of icon Karl Lagerfeld, life’s harsh realities have intruded on the fashion fantasy this season. So for her fall Miu Miu collection, Prada sent out caped crusaders to speak to the younger generation of engaged citizens who are going to need to be our heroes.

“The camouflage was a symbol of rebellion and connecting to nature,” the designer said backstage of the elegant eco-warriors who took to her runway set, which was flickering with frenetic imagery. “The capes are historical, a reference to the past and the future…an invitation to take care of human life…and the environment.”

Never mind that fashion’s reliance on the new is rather incongruous with an eco message, there were some lovely clothes here that you’d want to have hang around your closet for more than a few months. At least that’s something.

The set was a cacophony of visual overload to which anyone who has been sitting through a month of fashion shows could certainly relate. (Last day!) Created by artist Sharna Osborne, the 3-D installation of jumbled photographs, short video clips on old TVs and LED screens featured everything from grainy childhood pictures, to a glamour shot of Dolly Parton. Into the noise and commotion, the designer’s caped crusaders walked.

What immediately delighted were the dresses: delicate sheer, floral-embroidered and cinched above the knee with velvet ribbons, they were anchored with the season’s lug-soled boots.

The military might of camo patterns on cropped sweaters, fleece jackets, scarves and explorer packs contrasted with the girlishness that was the collection’s other through line. Consider the capes, in military blue, hooded shearling or fur-trimmed tweed, with fluffy crinolines spilling out, and the pretty macramé dress suggesting a fairy-tale heroine going forth into the deep, dark woods. Adding to the idea of glamorous weaponry were chic-looking velvet breeches (not an oxymoron) fortified with zipped utility pockets at the hips, and a floral cape Windbreaker with gentle volume that looked like a fall must-have to brave the unpredictable elements.

With a handbag slung over her wrist, and camouflage mary jane shoes on her feet, maybe, just maybe, Miu Miu’s glamour girls can save us after all.