“The Crown” effect on the Paris collections is undeniable, seen in Johnny Coca's latest lineup, which takes cues from Savile Row. 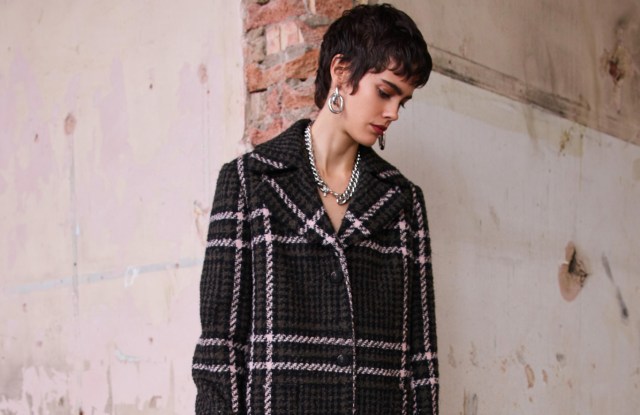 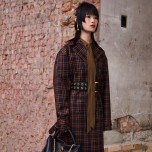 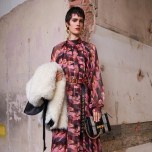 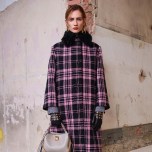 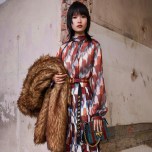 Maybe it’s “The Crown” effect, but the British heritage influence on the Paris fall collections is undeniable, from Dior’s Teddy girls (with a nod to rebellious Princess Margaret), to Chloé’s Highlands gallop, to Paco Rabanne’s regal rocker romp. It turned up again at Mulberry, which at least comes to it naturally, being based in Somerset, England.

Creative director Johnny Coca ladified Savile Row tailoring, offering a classic men’s wear-style overcoat in pink-and-white plaid with a smattering of sequins, a burgundy silk pantsuit dotted with Liberty blooms, a goldenrod dress in a graphic print inspired by men’s ties, and another in a pink-and-red abstract, almost camo-like feather pattern inspired by flock of mallard ducks that hangs out behind the Mulberry office in London.

There were (very understated) hints of punk to spunk things up in the accessories department: leather belts with gold grommets, gold drop link earrings with pearls, polished stone pendants on long chains. A removable chain on the Keeley satchel that can be worn as a bracelet was another thoughtful extra.

The designer’s biggest strength undeniably lies with leather goods, as evidenced by such covetable offerings as the two-tone oxblood and porcelain blue Christy pumps with a higher, V-shaped vamp, and the sensible new Millie twofer hybrid tote that can be squished to become a bucket bag, and looked particularly appealing in gray and black snakeskin.

While some might consider Mulberry’s clothing a bit stuffy, Coca clearly knows how to cater to his core customer. Case in point, the Duchess of Cambridge brought out his timeless Cinderella blue, belted cape coat for an engagement in Ireland this week. “When I designed that collection, I said this is like the coat for the Queen!” Coca explained of the fall 2018 style, noting that he’d been researching archival photos of the monarch. But, he laughed, he’ll settle for a princess.