Rushemy Botter and Lisi Herrebrugh made a quietly confident debut as the house sets sail on a new course. 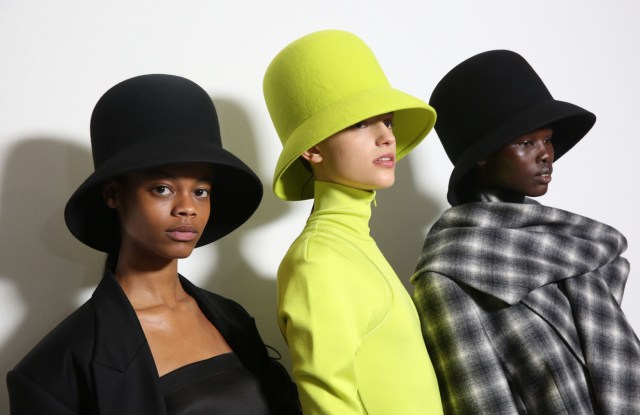 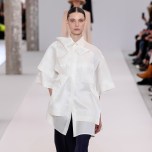 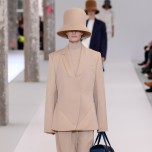 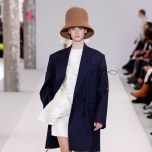 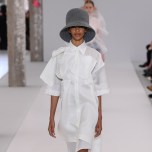 When Nina Ricci announced in August that it had hired Rushemy Botter and Lisi Herrebrugh, the duo behind the buzzy men’s wear label Botter, as its creative directors, there were more than a few raised eyebrows.

While the designer couple had just won the coveted Première Vision Grand Prize at the Hyères International Festival of Fashion and Photography, and were finalists for the LVMH Prize for Young Designers, neither of them had ever worked for a major fashion brand, let alone a house considered the apex of feminine romance.

How would the duo, known for their powerful storytelling and gender-fluid clothing rooted in Caribbean culture, revamp an 87-year-old couture house? It turns out, by sticking to what they know.

It started with a pin-striped suit — the first look they sent out in their debut collection for the French label on Friday. But there was nothing mannish about it: the jacket was inlaid with a panel shaped like a one-piece swimsuit laid flat, and softened with a sleeveless blouse that swirled around the body and spilled out over one hip.

Its construction was inspired by a closed parasol. While their winning collection at Hyères featured a plastic shark strapped to a model’s head, here the seaside theme was blink-and-you’ll-miss-it — a mere undercurrent in a sea of relaxed tailoring and floaty layers that happily shrugged off seasonal considerations.

“We’re trying to create a new kind of romanticism,” Botter said during a preview. “We’re not here to create a Botter woman,” added Herrebrugh. “We’re here actually to see Nina Ricci through our eyes, which is a completely different story.”

Gauzy oversize shirts came with flyaway fabric attachments at the collar that subtly evoked the stylized dove on the packaging of the house’s famed L’Air du Temps fragrance. Ditto the bursts of yellow that dappled the show, breaking up a mostly neutral palette.

The tailoring took its cues from the corsets the duo found in the Nina Ricci archives, though they sensibly avoided straying onto territory well mapped by Jean Paul Gaultier, a fellow brand under the mantle of Spanish fragrance and fashion group Puig.

A bathing costume outline appeared as a trompe-l’oeil detail on a nude trouser suit, or as a striking electric blue panel on an oversize gray coat with dropped shoulders and overlong sleeves. The sleeve constructions — cut flat to improve posture — were among the lineup’s strong points.

Herrebrugh said: “It was important that the shoulder is not too straight but tilts a bit, because we feel like we want to represent a strong woman but not…” “Aggressive,” completed Botter. It was a quietly confident debut that marked out the pair as talents to watch, as the house of Ricci sets sail on a new course.