Japanese designer Kei Ninomiya, who learned his craft at Comme des Garçons, weaved leather biker jackets into what looked like round wicker cages. 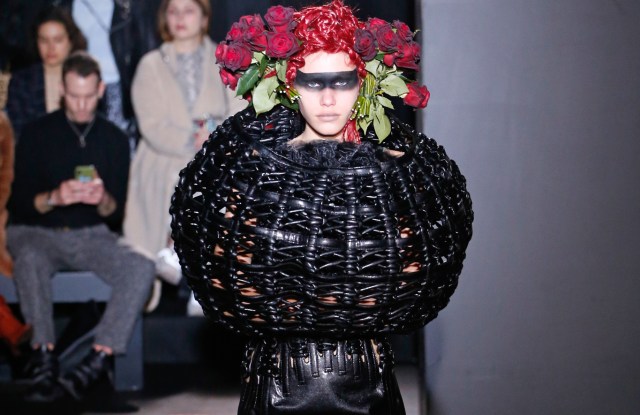 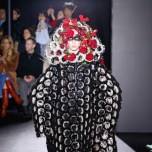 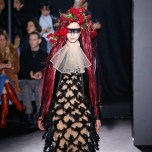 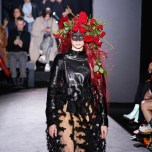 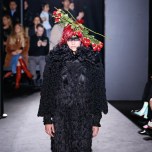 Life bubbled under the all-black exterior of Kei Ninomiya’s silhouettes. The designer, who learned his craft at Comme des Garçons, themed his collection around roses, which were sported by models on blood-red headpieces created by artist Makoto Azuma, infusing the silhouettes with an organic feel.

The first looks, rigid structures made of ruched taffeta taking over the models’ bodies, hinted at alveoli, while an overskirt with dangling black taffeta threads, worn over a nude tulle skirt, looked like spider’s legs.

Further along, classic pieces like leather biker jackets morphed into different creatures entirely: on one look, a jacket was progressively weaved in to what looked like a round wicker cage, a gleaming leather contraption encasing the entire lower part of the model’s body. The same structure was thrillingly applied to the top of a dress, cradling the model’s torso up to her neck.

There was a strong sense of protection: organza tops had thick wraparound corsets bunching up the waist, while some silhouettes sported leather harnesses with what looked like blown-up tubes coming out to form full skirts. The silhouettes got bigger as the collection progressed, leaving the all-black look for touches of flesh pink and bruised purple: models’ heads peeped out from clouds of sculpted silk flower buds, some of them mobile and pom-pom-like, others weaved tightly together.

It was one of Ninomiya’s more experimental collections — despite strong supporting acts in the form of wool trousers with pleated seams and skirts with 3-D front sashes — but pushed material treatment to thrilling heights.