Virgil Abloh was inspired by the codes of the turbo-charged world of motor racing, such as checkered flags and racing overalls. 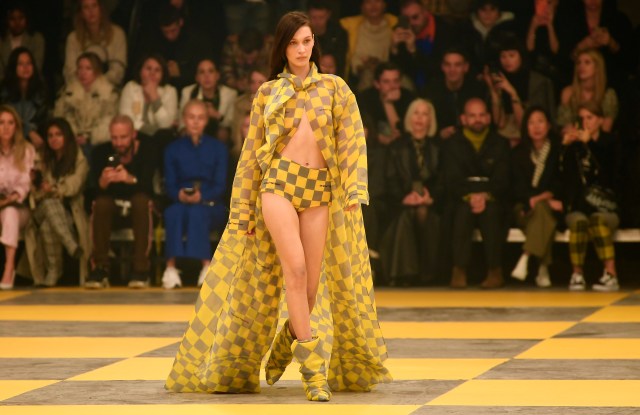 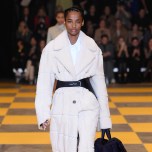 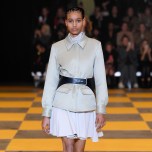 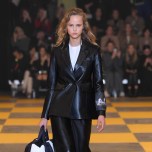 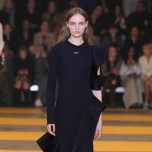 Virgil Abloh had a tongue-in-cheek message for those who think his Off-White brand is a license to print money: the invitation for his fall show was a clear plastic envelope filled with fake bills. Some included the soon-to-be-scrapped 500-euro note.

Though the streetwear label slipped from the number-one spot on global fashion search platform Lyst’s latest quarterly index of fashion’s most desirable brands and products — to a still-impressive number two behind Gucci — its “if you make it, they will buy it” aura appears intact.

In fact, Abloh seems so confident in the brand’s momentum that he now barely includes its signature markers — ironic quotation marks, diagonal stripes and industrial-themed belts — in his runway shows. Instead, he uses the stage as a platform to expound on his brand values.

“There’s an empowered woman, a young woman, that I’m enjoying not treating as a passing trend,” he said in a preview. After collaborating with Nike last season on a track-and-field-themed show, this time he delved into motor racing, inspired by the Rockford Speedway, a Nascar race track near his home town of Rockford, Ill.

“I’m not into sport, because we’ve kind of exhausted that idea, but I’m into male-dominated niche culture,” he said. The collection played with the codes of that turbo-charged environment, such as checkered flags and racing overalls, to create an elevated casual wardrobe.

The check patterns appeared as an Op Art pattern on a baggy sweater, and as graphic oversize squares on a puffer coat. The flame-retardant suits worn by race-car drivers translated into a striking grid-patterned jumpsuit with a Velcro harness belt — a detail that also made its way onto a tailored jacket and a ribbed knit dress.

Some were clearly show pieces, like the split-to-the-thigh dresses with trains modeled by the power quartet of Adut Akech, Karlie Kloss, Gigi Hadid and Bella Hadid. Others made a compelling case for sophisticated sportswear, like the pleated jersey dress and silvery trench worn by Mariacarla Boscono.

Abloh, who is also creative director of men’s wear at Louis Vuitton, has been thinking about new approaches to women’s tailoring. Options included a petrol blue masculine-feminine suit jacket that was half wool, half glossy pleated satin.

Beyond providing a handy graphic peg for the clothes, the motor-racing theme was an apt metaphor for the multitasking designer’s need for speed. “Time waits for no man,” he mused.

What drives Abloh is anyone’s guess, but his own. The designer made clear he doesn’t care for rankings.

“I’m honored, first off — I’m not a crazy person — but it does zero fulfillment. I don’t do it for that. I do it to make this narrative of the world today and I look at that, the byproduct of that accomplishment, as a marker that I’m making relevant things,” he said.

The group this week marked the launch of another label, Kirin, by DJ Peggy Gou. “I like to think that it’s the natural progression. Fashion every five, 10 years has a new set of players. Some stay for long, some go for a while, so I’m just trying to add a chapter into this industry that we all love,” commented Abloh.

Where does he see his brand in 10 years? “I see my brand hopefully carving its own lane,” he said.