The golden light of a setting, winter sun added extra sheen to the designer’s clean and poetic Middle East-meets-West aesthetic. 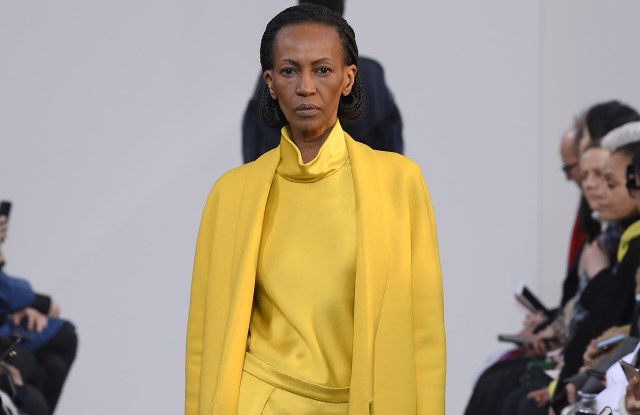 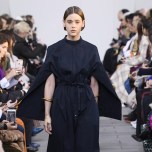 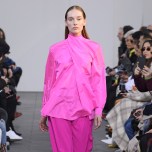 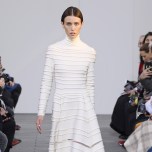 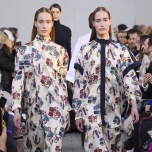 For his first show since officially joining the French Couture Federation, Maison Rabih Kayrouz toggled between ready-to-wear and haute couture, including some easy silhouettes for men. It was a masterful display of the designer’s clean but poetic Middle East-meets-West aesthetic, the potentially tricky segues managed with precision and used to hold the audience’s attention.

The show opened with elegant black trousers, paired with a white, cotton shirt, the sleeves left open, billowing behind like wings. Then came a voluminous green and gold ballgown that touched the ground, the arched sleeves formed by a sweep of fabric from a tightly gathered waist; split open in front, the skirt offered a flash of leg through the piles of the shimmery material.

The contrast of these first two looks was captivating, like the pieces themselves; so was the way he opened them up in unexpected places.

But where is the house’s boundary between rtw and couture?

“Is it important?” he asked after the show, still flush with emotion after an exuberant victory lap.

“No, it’s not, it’s my work, this is how I like to do things — no, it’s not important, as long as I respect the know-how and the way it should be done,” he answered.

Gold mesh pieces were standouts. One dress melded to the upper body like fitted chainmail, but gave way to an airy skirt, the rows of woven gold interspersed with strips of transparent black. In another look, the gold mesh was structured like a pullover sweater, with long sleeves and a mock turtleneck.

For men, an elegant, striped djellaba. A frock for women was crafted from the same material, the fabric twisted around the body and attached at the neck. He also experimented with hemlines, redirecting the flow of skirts with broad and subtle zig-zagged cuts.

The golden light of a setting, winter sun — a rare appearance in Paris — added extra sheen to the poised collection.