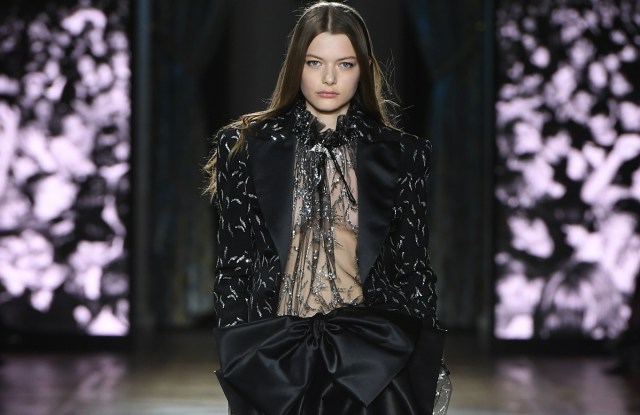 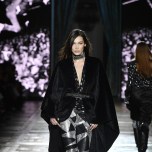 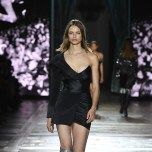 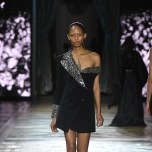 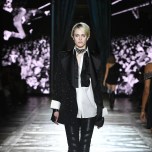 Gabriele “Bebe” Moratti believes fashion can be an agent of change.

“The collection was inspired by heavy metal and the rock-‘n’-roll icons who inspire me: the ones who also go to protest rallies, strong individuals but with a conscience,” said the Redemption designer. “Music today is devoid of that sort of message, but I think fashion can step in and fill that void. For example, if we use at least one Instagram story a week to promote a positive message, we can really change things.”

At Redemption, change comes in the form of eschewing real leather for vegan versions: trousers, embossed and quilted miniskirts, belts and biker jackets came in luxe-looking plastic substitutes, although the brand plans on switching to either recycled plastic or a mycelium base in the near future. “I really don’t think sexy eveningwear and sustainability are mutually exclusive,” said Moratti.

Aside from the vegan leather looks, men’s tuxedo jackets were the starting point of the collection, which was shown to the energizing riffs of Megadeth’s “Peace Sells.” These were merged with eveningwear looks to create a hybrid silhouette on model Bella Hadid, half sharp tailoring, half glitzy bustier dress — the half drape was particularly difficult to make, according to the designer.

Rhinestone trims on trouser suits and choker necklaces shimmered and sparkled, while devoré velvet blouses and faux-fur animal-print coats and capes offered softer touches. A slew of minidresses drove the point home: wether in lamé, sequins, off-the-shoulder or with oversize shoulder pads, these looks were not for the faint-hearted.