Stella McCartney applied her empowerment ethos to a strong collection in which she upped the sustainability quotient significantly. 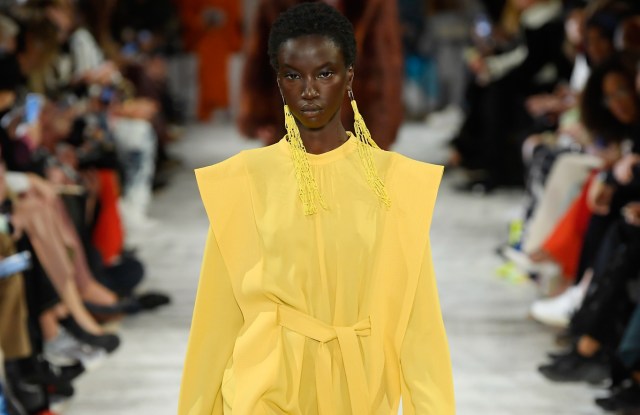 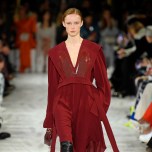 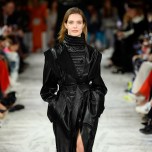 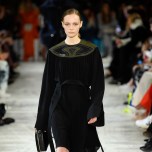 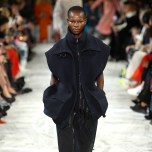 Stella McCartney is on a power trip, but then, she has been all along. Her consistent ethos is focused on delivering fashion as an element of empowerment for women — and for the past several years, men — not just in large-scale political ways, but in the everyday reality of getting it all done, whatever that might mean for each individual. That she does so in a manner ethically consistent with her views on animals and the environment is well known: the former, a lifelong passion; the latter, an ongoing journey of discovery and education about which she is very serious.

More confident each season in her knowledge about sustainable practices, McCartney now highlights key looks on her runway. For fall, that choice was more obvious than ever in a dress made of knitted strips of old T-shirts. She also finished some looks with long, thick artisanal fabrics chords, referred to in her program notes as “twisted and wrapped adornments,” by the artist Sheila Hicks. These infused a crafts-y element into the collection and made for an appealing insert, yet one she was wise not to overplay.

Overall, she further developed her signature play of structure and softness. Her two key items of the season: a great coat and a waisted dress, building both sides on a strong shoulder for an authoritative attitude. The coats were terrific, many in fake fur and fake leather, though the winner was a chic, belted Prince of Wales check. Often the dresses had interesting details of cut — architectural panels running down the sides; arch of fabric at the shoulders — and some shots of pink and bright yellow into the neutral palette of mostly black, brown and gray. McCartney’s men looked polished in refined suits, often under smart coats, including a cozy fake fur.

Not all of McCartney’s environmentally kind efforts were as obvious as the upcycled T-shirt dress. She also repurposed fabric remnants from past collections and used sustainable viscose throughout, presumably for some of the dresses, though from the audience vantage point, you couldn’t tell which. And that’s a good thing; they looked chic rather than statement-y.