“Sometimes something that is beautifully made is the most fashionable,” Browne said. 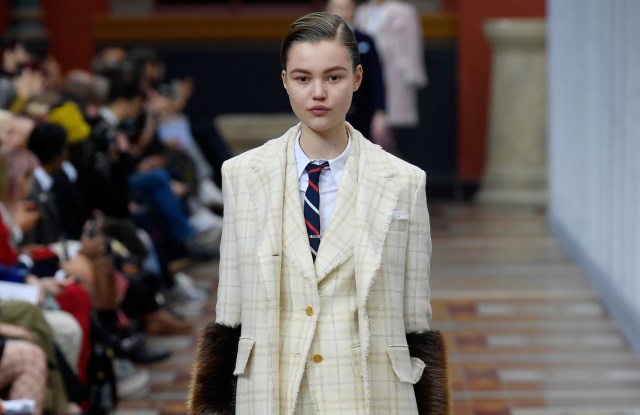 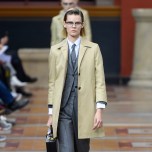 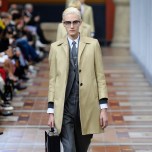 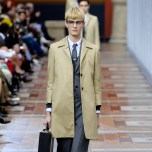 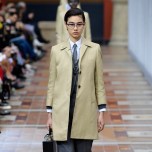 Thom Browne went back to basics for fall, as much as you can say that about a man who would send out a ready-to-wear collection that includes a blonde astrakhan coat embroidered with gold bullion (with mink sleeves, natch), or a pair of $15,000 silk stitch flower-patterned trousers. No economic slowdown here!

He went back to basics in that he scaled back most of his runway theatrics (no squashed ice cream cone face masks, or models with their arms bound, ahem), to focus on the piece that started it all: the classic tailored suit.

It’s been 10 years since Browne debuted the signature shrunken fit for men for the European audience at Pitti Uomo. And this season, he properly introduced it for women, by putting it at the literal center of his show. “I’m not trying to put men’s clothing on women,” the designer said during a preview when asked about the gender-fluid trend in fashion. “This jacket is very specifically tailored to a woman.”

Using a similar set to the one in Pitti, Browne choreographed his show around an all-female “executive pool,” he said was a nod to female empowerment, putting them in a glass enclosure at the center of the Beaux-Arts fitted with 11 identical desks and typewriters. The show began with a procession of identically clad models heading to work, tailoring on parade, in Chesterfield coats, shrunken gray suits with three-quarter-sleeve jackets and cropped pants. There was a button left undone here or there to draw attention to the luxury of working button holes and the vents of the coats were edged in the designer’s trademark red-white-and-blue grosgrain ribbon, also present on the very sensible brogue shoes.

When the models removed their coats and put down their briefcases to sit at their desks, it brought to mind the appeal of uniform dressing that men can opt for should they choose, and now women (it would certainly make Marie Kondo-ing your closet a whole lot easier).

For his second act, Browne showcased his couture-like creations, with looks representing the atelier’s handwork. He showed several versions of his signature (and it must be said, rather stiff) column dresses with various levels of trompe l’oeil decoration that put men’s tailoring on the dresses — a bouclé dress made to look like a suit, for example, and a bead embroidered dress-as-tuxedo with a black-and-white portrait of Lady Una Troubridge by the gender-bending artist Romaine Brooks. More accessible, perhaps, were skirts with men’s shirting patterns tucked into the pleats, men’s tie-patterned pants, bouclé coats, and that pantsuit in gold bullion-embroidered tweed for those who can afford jewelry-as-clothing. “Sometimes something that is beautifully made is the most fashionable,” Browne said.

Young women’s interest in tailoring seems to be on the rise, from Zendaya taking the Tommy x Zendaya collection in a more structured direction, to 15-year-old “Eighth Grade” star Elsie Fisher choosing a black Thom Browne suit for the Oscars, to the wardrobe of Janelle Monáe, who sat front row at the show. So it was a smart business move for the designer to also remind everyone of where he started. He added, “I would love for people to think of me for a beautiful jacket they will have forever.”