“This is about saying we appreciate and love you,” Zendaya said of the multigenerational, size-inclusive cast of models, all women of color. 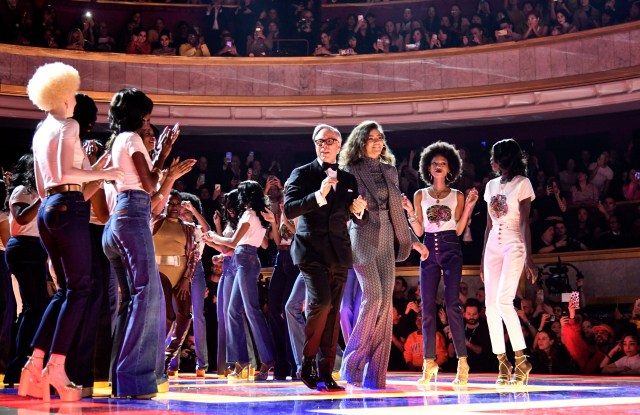 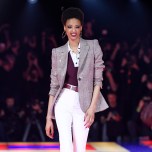 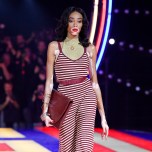 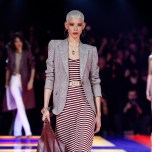 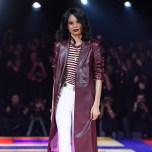 When the original Battle of Versailles happened in 1973, an African-American hadn’t yet made it onto the cover of American Vogue (that would be Beverly Johnson in 1974), much less into the creative director role at a European luxury house like Virgil Abloh at Louis Vuitton Men’s. Fashion’s record of inclusion is still far from perfect, but on Saturday night in Paris, Tommy Hilfiger and multihyphenate Zendaya reminded everyone of America’s role in the change with their celebration of diverse beauty featuring models of color in all sizes to launch the first Tommy x Zendaya collection in stores now.

It turns out roller discos aren’t unfamiliar territory for five-time Formula 1 champion Lewis Hamilton, whose second collection for Hilfiger drops in a couple of weeks.

“My dad use to go to roller discos in the Eighties,” he told WWD. “So when I was younger, I used to borrow his skates and go to a couple of places in Stevenage, where I grew up in Britain.”

The cross-generational runway cast included original Battle of Versailles model Pat Cleveland, Johnson, Veronica Webb, Beverly Peele, Halima Aden, Winnie Harlow and Jourdan Dunn, while singer Grace Jones brought the house down by vamping it up to her hit “Pull Up to the Bumper.”

“We’re paying homage to these women who changed our legacy…and allowed for me and so many others to be here,” Zendaya said in a preview with Hilfiger and her stylist (and “America’s Next Top Model” judge) Law Roach, who collaborated on the collection. “This is about saying we appreciate and love you,” she added of the black talents who came before her, including the models who helped American designers win the French-American Battle of Versailles, as WWD dubbed the historic runway showdown to raise money to restore the Palace of Versailles, which pitted five French design houses (Yves Saint Laurent, Givenchy, Ungaro, Pierre Cardin and Christian Dior) against their American counterparts (Halston, Oscar de la Renta, Bill Blass, Stephen Burrows and Anne Klein).

“What Zendaya has done is unprecedented,” said Shahidi, star of TV series “Black-ish” and its spinoff “Grown-ish.” “It’s the only show I’ve even gone to, because it’s so important to support my big sister.” (The term “sister” used figuratively.)

Hilfiger’s showmanship set the stage for a collection with an easygoing, democratic style similar to what came down the runway in 1973, though squarely in the affordable luxury category this time (most everything in the collection is less than $500). It turns out, in a season when designers have been trying to move on from streetwear and get women out of their sneakers and sweatshirts, Zendaya was already there.

“Tommy had been doing more of an ath-leisure vibe, and I wanted to do something that tapped into what Tommy had done before, which is tailoring. Everything has structure but an ease and effortlessness to it. We’re also doing gowns, which Tommy has never really done before,” said Zendaya, who goes from Paris straight back to L.A. and into production on her HBO series “Euphoria.”

“There was this sophistication and glamour young girls don’t have anymore,” Roach said of the Seventies. “What Zendaya is trying to do is continue that legacy of dressing up and feeling glamorous.”

On the runway, the result put the focus on tailoring, a departure from Hilfiger’s collections with Hadid, with Prince of Wales check, or awning-stripe, denim-fitted, long-line blazers, and flared trousers or cuffed shorts topped by zodiac-sign T-shirts and Seventies-inspired polos. “I’m into zodiac things,” said Zendaya. “I’m a Virgo.”

“When they showed up at Chateau Marmont with their [inspiration] boards, I started shaking,” said Hilfiger. “Because the Seventies were my era [my first store in Elmira, N.Y.] People’s Place was all about this groove. I said I have to do it again someday but in an authentic way. They brought it to us on a platter…I gathered my team, said don’t even show them what we were going to show them — which was a more casual extension of street. They brought us a brand-new, fresh idea that didn’t end with the clothes, it was the music, the casting, it’s the perfect marriage.” (Zendaya and her stylist originally wanted to stage the show at Versailles, but got shut down for logistical reasons.)

Figure-flattering for all sizes, belted midiskirts came in denim or oxblood leather (which will carry a bit of a higher price point), topped with multicolored Lurex striped sweaters, silk shirts in a groovy, zodiac-inspired print, cropped or halter tops. “Size inclusivity has been important to me always,” Zendaya said. “If women in my family can’t all wear it, I don’t want to make it.”

It was a no-brainer for Hilfiger, who gave the star and his stylist free rein for the inclusive casting. “I said, “Do what you think is best.” Obviously a couple of girls have been in our family, Winnie Harlow is one, so I said make sure they are included. But they really chose.” (Unlike the Battle of Versailles models, who famously had no heat or toilet paper backstage in an attempt at French sabotage, “ours are staying at the Ritz,” Hilfiger quipped.)

For evening, Halston-like beaded jumpsuits, and Burrows-like halter dresses, swirling in Lurex pleats or multicolored jersey, which Cleveland used to full dramatic effect in her signature dance down the runway, were among the even more dressed-up options inspired by Zendaya’s reputation as a “red carpet girl,” her stylist said.

The show ended with the ultimate feel-good moment: the entire cast of models, all ages and sizes, spilled onto the runway looking great in American fashion’s ultimate equalizer — denim. Sister Sledge’s anthem “We Are Family” said it all.