Pierpaolo Piccioli gave new meaning to the notion of poetic fashion. What rhymes with exquisite? 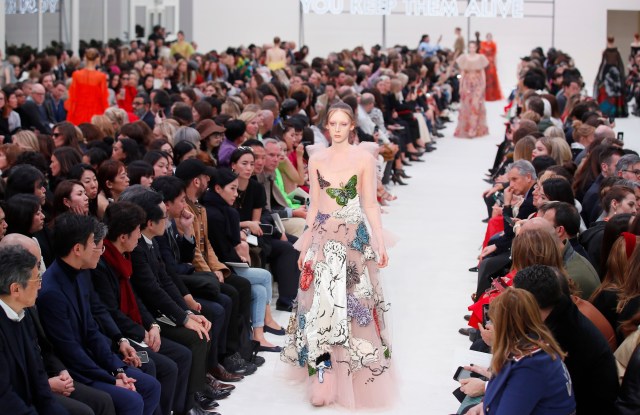 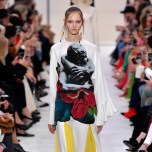 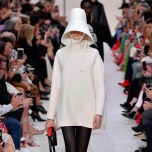 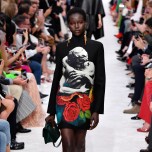 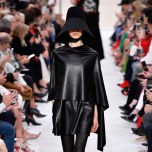 Poetic fashion — a mood, an aura. You know it when you see it. Valentino’s Pierpaolo Piccioli maintains that the concept runs deeper than mere fashion overstatement. He sees a distinct parallel between couture and poetry — both beautiful, but both often perceived as belonging to the past. Au contraire, he maintains. “I think of poetry as something that is still beautiful, but it can be contemporary as well,” Piccioli said during a preview. Case in point: The Movement for the Emancipation for Poetry, which employs guerilla tactics to anonymously post pieces of poetry in public places, thus dramatically expanding its reach. Which is exactly Piccioli’s desire for Valentino, “to keep the values of couture while being contemporary, and making the brand relevant today.”

So why not codify that point of fusion? Piccioli thus asked several poets, Robert Montgomery along with Greta Bellamacina, Yrsa Daley-Ward and Mustafa the Poet (he works with The Weeknd) to create new pieces for Valentino on the most obvious and deepest topic, love. Piccioli compiled the works into a little book that he gave to guests to his show. He also asked Undercover’s Jun Takahashi to work on imagery, as he did for men’s. The result was a collection about love to love.

Piccioli decorated the clothes with Takahashi’s renderings of neoclassical-inspired lovers in passionate embrace against blood-red roses, as well as with lines of poetry. In the case of the former, he went bold, placing the large-scale figures on the bodice or skirt of a dress or he sides of a coat, often using intarsia and appliqué techniques derived from couture. The lines of text were sometimes prominent, for example, on the back of a jacket: “You thought I was too dark until I stretched you into a galaxy.” More often, they appeared as utterly personal, a line written inside, on a hem facing: “There’s a forever beyond the sky. I think we should go there tonight.”

Ah, love! But this is fashion, and however passionate, premise doesn’t matter if the clothes don’t work. These were glorious. Piccioli’s evening glories have altered the look of the red carpet with gentleness, romantic volume and proudly diverse appeal (hello, Gemma Chan and Frances McDormand), and his new versions were stellar, whether plain and monastic or delicate froths of tulle. He’s gotten so much attention for his evening work that his daywear too often gets short-shrift. Mistake! It looked fabulous and smart.

Piccioli may be a dreamer, but he lives in the world. While he continues to work the haute volumes that have captivated fashion, he knows they’re not the most practical shapes for everyday. He knows, too, that fashion must be kinetic. So bring on the short stuff! He sure did, in shapes derived (sometimes specifically) from midcentury couture, only niftied-up for now: cocoon tunic reimagined as sweater hoodie spouting poetry and worn under a short haute coat in bright orange sprouting feathers; turtleneck minidress, its entire length covered by that pre-coitus couple embedded in roses. Too much? How about a similar shape in all white with side-tie at the collar, or a perfect black suit, this with a longer skirt, worn with a bow-neck blouse? Breathtaking either way. So much so that Valentino devotees and newcomers alike may just find, to paraphrase Mustafa from the poetry book, a [sartorial] song that won’t leave their heads.