“I was enjoying it because I became like a young girl creating clothing," said the designer. 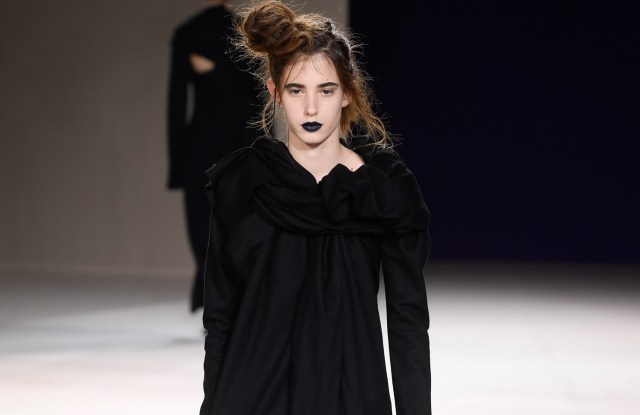 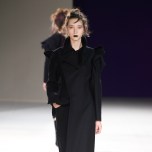 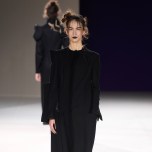 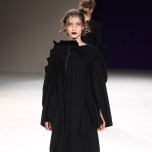 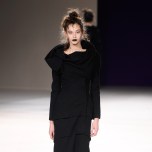 “The shows today are definitely about selling clothes, and I get that, but shows used to be about selling fantasy and then you’d sell the clothing version. I miss that. And Yohji just shows it, he does it,” said seasoned model Coco Rocha, who was at Yohji Yamamoto as a guest, wearing a spring 2019 red gown that zipped like a puzzle and required a husband assist to get into.

She wasn’t the only fan in the audience. Diego Della Valle was front-row. “I like his clothes,” he said when asked why. Does he wear them himself? “Sometimes…but my wife 100 percent.”

Yamamoto’s latest creative outing was particularly lively, with his signature black draping technique expressing an undeniable wit at times. One coat had a particularly unusual flourish — a black gloved hand, middle finger extended, near the neckline.

Backstage, Yamamoto admitted it was a bit of an “f-you” to the fashion establishment, letting on that the collection was a throwback to the time before la mode, when do-it-yourself, make-it-your own handiwork was where it was at. Hence, the trailing loose threads, childlike hand-painting, colorful silly-string embroidery and crude white stitching that decorated his palette of long, lean black coats, skirts and dresses. Not that any of it looked amateurish. Far from it.

The collection was a study in beautiful abstraction, draped with the care of couture, with flourishes suggesting an oversize cargo pocket here, a shoulder bow there, and ruffles here and there. It was a joy to watch, even if the finale of hooded-black ceremonial robes did strike a bit of an odd note, apparently a reference to 17th-century Spain or some such, Yamamoto said backstage afterward in his trademark flow. “I was enjoying it because I became like a young girl creating clothing.” We were right there with him.