Riccardo Tisci is still getting to grips with green fashion, and it remains a work in progress. 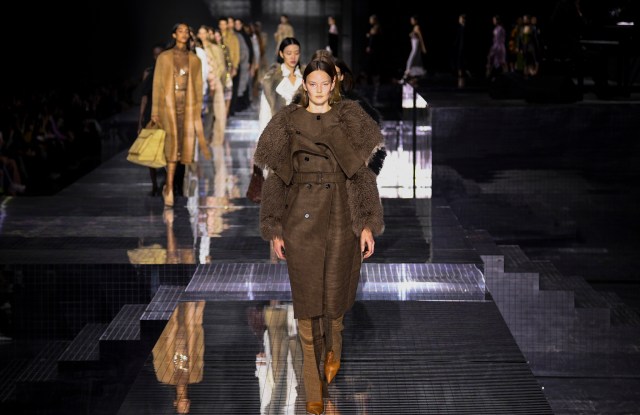 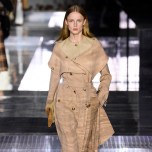 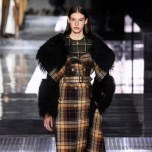 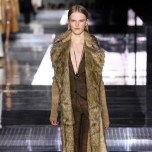 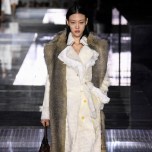 Burberry is burnishing its green credentials, staging its second carbon-neutral show under the soaring Victorian arches of Olympia London and planning to reforest areas of Australia destroyed by the bush fires, among other environmental moves.

The fall show set — a mix of the elegant and the raw — reflected this new mood: The space was chilly and the floors bare. The latter still had markings on them from the latest trade show.

By contrast, the rectangular catwalk had a deco feel with little mirrored panels lining the sides, while pianists Katia and Marielle Labèque played live on stage as models strutted.

Burberry creative director Riccardo Tisci admitted he’s getting to grips with green fashion, and it remains a work in progress. “It isn’t 100 percent developed yet. We do a lot of nylon, but to get the right nylon is difficult. Nobody has good quality yet,” he said, adding that he still loves real fur.

“I did fur for all of my career because I used to do couture, but I don’t miss it. Now there are so many alternatives that look real, but it is still very expensive because of the technology,” the designer said.

Tisci embraced fur in a big way for fall, jazzing up tailored suits with long fuzzy scarves or wrapping the fluff around the collars and sleeves, over the shoulders and down the lapels of his classy tailored coats. That faux stuff is growing on him.

While he talked about this collection being very personal, and about his memories of being a young man in London, and in India where he founded his first business, his vision wasn’t new. It was a continuation of what he’s been doing with the brand, turning Burberry into a lifestyle offer with a cross-generational appeal: After all, the brand has a lot of stores to fill and new markets to tempt with checks, trenches, tailoring and T-shirts.

As always, there was a big haute element and lots of luxed up icons, including trenches with big open collars or thick gossamer belts draped at the back; slim, laser-cut leather coats and shiny tartan toppers for men.

Tisci ran wild with checks, tartans and plaids, which landed on everything from silk tops with little shawl details to slipdresses to tailored jackets for men and women. There were also sweet rugby sweater dresses with thick stripes; leggings, bustiers and triple-check head-to-toe combos for all those young’uns whom Tisci is so eager to court.