Mouret is one of very few designers who is looking at sustainability from 360-degree angle, and after the show, posed a question that's on lots of people's minds right now: What's the point of staging fashion shows when everyone should be trying to cut down on waste? 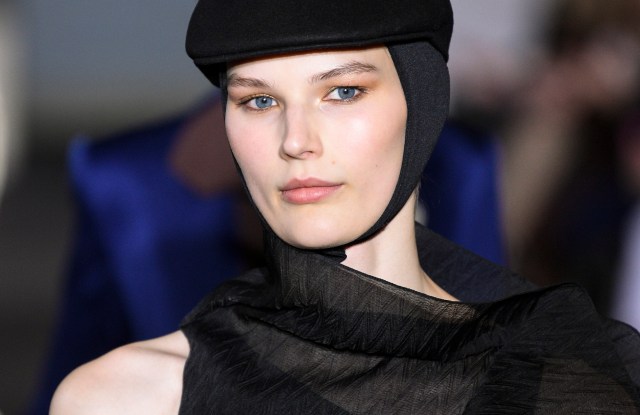 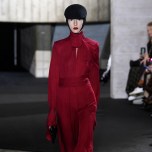 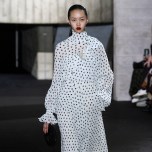 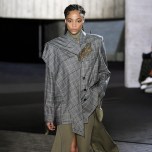 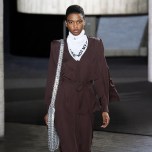 The designer drummed up lots of drama at the National Theatre, using models instead of actors to express his views about Eighties Britain, sustainability and the importance of long-lasting, versatile clothing. He even sent male models down the runway wearing tailored suits, not because he’s reviving his men’s line, Mr., but because he wanted to show that anyone can wear anything.

“My guys are big size-20 girls,” he said after the show. “Clothes are no longer based on size, on the number inside the label or the gender. I want to break that mold and to push it farther away. So many men now put on my jackets and trousers, and say ‘I love it’ and we find that amazing balance where you give space to people to find their identity.”

Mouret’s men and women wore their Eighties looks with aplomb: voluminous capes with epaulets, plaid trousers, languid, power-shoulder jackets and loose bathrobe topcoats and trenches. Models strode the runway in silky jumpsuits or long wispy dresses, some with flourishes of fabric around the wrist, others with a drape here, a long rippling scarf there. Other looks were less romantic and more “Working Girl,” especially the pencil skirts paired with slouchy boots and all those linebacker jacket shoulders.

Those shoes and boots were from an Italian brand known as Dear Frances, which aims to produce as ethically as possible and in small quantities. Mouret said that from this season, more than half of his fabric buy will be eco-friendly and his company will be carbon neutral within the year.

He’s already swapped his old hangers for recyclable ones, while the show’s jewelry was made partly from bits of wood he found on the beach. “Why do you have to buy everything?” he said.

Mouret is one of very few designers who is looking at sustainability from 360-degree angle, and after the show, posed a question that’s on lots of people’s minds right now: What’s the point of staging fashion shows when everyone should be trying to cut down on waste? It’s the elephant in fashion’s room, and no one seems to have the answer.