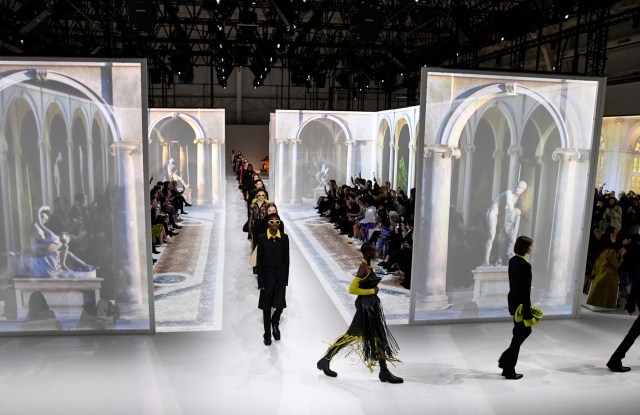 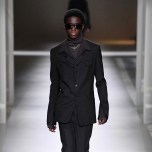 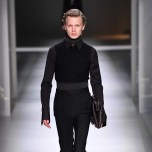 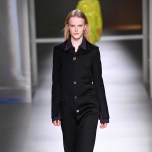 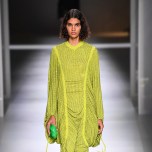 The question going in: a year into his role, could Daniel Lee survive the meteoric ride on a squishy It Pouch and live up to the hype? The answer coming out: You betcha.

At 34, Lee is one of the first children of the Nineties to head a major luxury house and his affinity for the decade characterized by all black and minimalist grit punctuated by the acid flash of rave culture, was on full display on the runway, which articulated a way forward for fashion that was not minimalism, maximalism or street, but a meeting of all three (sans logos, of course).

Backstage, he acknowledged the Nineties “are embedded” in him, but said it was Bottega Veneta’s trailblazing handbag history that was his starting point — specifically, how the brand made its name breaking with Sixties structured bags and introducing softness and sensuality into the category with leather weave intrecciato.

That thought led to more freedom, movement and comfort in the clothes, which in previous collections have been a wee bit unwieldy and stiff.

He still worked his now-familiar tough, elongated silhouette on men’s and women’s tailoring, but instead of using leather, used black stretch fabric on long-line coats cinched with leather straps in the back, and flared pants slit over square-toed luxe versions of Fryes. A boxy, cropped zip-front jacket over high-waisted flared pants for men was fresh. And flashes of acid green and hot pink (as on the extended collar and cuffs peeking out from Kaia Gerber’s black suit), mussed things up with a hint of up-all-night subversion.

On the sportswear side, a covetable women’s trench with volume in the sleeves, and for men, an intrecciato puffer vest were strong commercial propositions, but waxed Barbour coats seemed like a bit of a tangent.

Bridging “super-formal and the street” was a goal, Lee said, so there were elements of decoration throughout, from the one-off gilded button that lent specialness to a black double-breasted flared coat, to the long-sleeve, liquid-y beige sequin glamour gown, to the coolest embellished designer jeans to come down the runway since Gucci in the actual Nineties — high-waisted, flared legs, coated in muted stones, and worn with a cape-sleeve button down.

Of course, there were miles and miles of fringe (is it something in the water in Milan?). Hot pink knit fringe was swinging from a dress under an elongated cardigan, and swaying from a butta’ yellow shearling statement coat. Allover fringe knit pants may have gone a strand too far, but a supersize yellow shearling clutch with fringe mane looked like a prime cuddle buddy.

Speaking of softness, Lee is working at developing knitwear into a house signature. Black ribbed-knit flared pants and a pleated short-sleeve top were no-brainer comfortwear, and a black sweater dress and cardigan cleverly worked the chunky gold chain detailing from the brand’s jewelry and handbag offerings into the scoop neckline and cuffs.

Accessories included an haute Croc-like shoe (they just will not go away!), a twisted weave envelope clutch, and a supersize woven tote in keeping with fall’s more-is-more bag trend.

Where Lee had been a bit of a deer-in-the-headlights during the postshow scrum the past couple of seasons, this time he was prepared, ably stopping mid-sentence to greet his boss, Kering chairman and chief executive officer François-Henri Pinault, and the actress Sigourney Weaver, who it should be said, was swooning over what she’d seen.

It’s no wonder; these were exactly the kind of clothes one could imagine a badass Nineties alien slayer wearing.