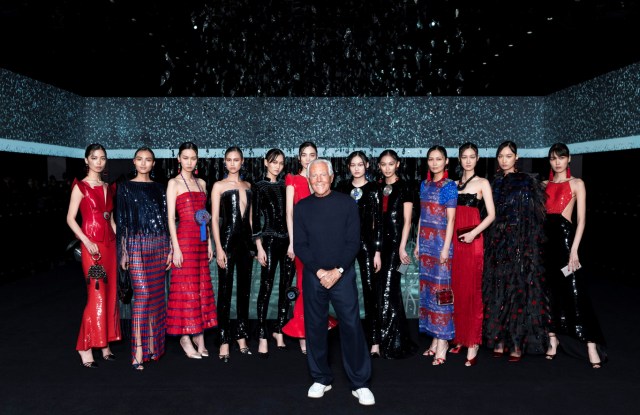 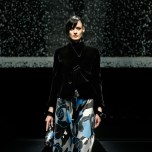 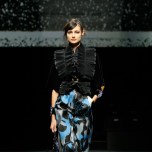 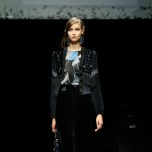 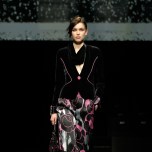 Milan Fashion Week came to an end behind closed doors on Sunday, with Giorgio Armani showing his collection without an audience after a spike in cases of the coronavirus over the weekend sent shock waves through Italy, closing some museums and schools and forcing event cancellations — but not keeping people from shopping on Via Montenapoleone, it should be said, some wearing masks.

The Armani show went on online — and during the live-stream, models could be seen walking around a reflecting pool with flowers and hanging vines conjuring a ghostly nocturnal garden. On the runway, romance ruled with softened military silhouettes, flashes of pink, loads of velvet and camouflage floral patterns.

The designer rendered maxi coats in soft black or blue velvet and reinterpreted camo as an abstract pink and gray or pink and blue petal pattern on silk maxi skirts and trousers, and at least one matched set resembling a kind of femme paratrooper uniform. On the subject of softness, a hot pink, zip-front “fur” jacket over a pale gray balloon skirt looked luxe for faux, and pink satin pants peeking out from an exquisite black velvet robe coat made for a fun touch.

As always, jackets were hero pieces, and this season, there were lots to love, the best in black velvet and shrunken shapes — double-breasted, with a scarf drape detail, or ruffled frills.

A lot of the evening looks would seem red carpet-bound, including a single shoulder, caped black velvet gown with a dramatic fan of feathers at the shoulder, and a black velvet column with beaded fringe epaulettes. (“Judy” star Renée Zellweger wore Armani all through awards season, including to the Oscars).

For a finale, the designer sent a love letter to his friends and fans in China, where the coronavirus has hit hardest, a country with which he “has always maintained a special bond, both aesthetic and cultural,” according to the show notes. The selection of looks from the Giorgio Armani Privé spring 2009 and 2019 collections, including a red sequin cheongsam with sculpted shoulders and tassel detail, was nothing short of stunning. Then he took his bow…to the empty room.