Alessandro Michele dedicated his fall Gucci collection to the multitiered ritual of designing, making, staging and viewing a fashion show. 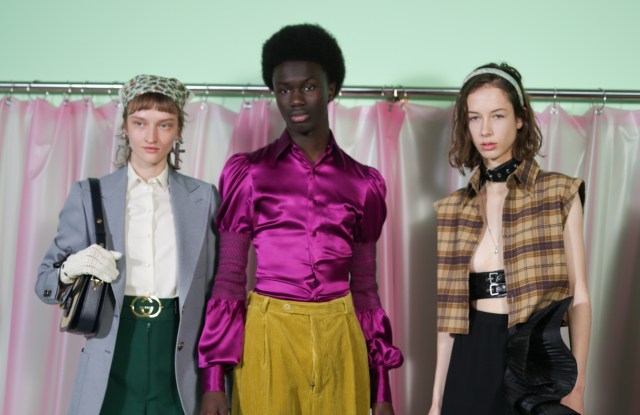 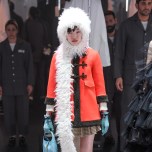 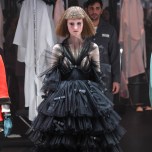 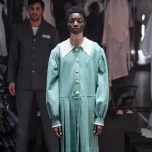 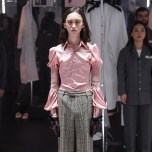 Is fashion a religion? Alessandro Michele thinks it’s pretty close, with the runway show its most revered ritual. Michele dedicated his fall Gucci collection to the multitiered ritual of designing, making, staging and viewing a fashion show. He spoke of the show ritual in intimate terms, and seemed to channel old-school insider passions.

“Fashion is a complex mechanism, it’s theatrical. All of us work for this ritual, that is almost religious,” Michele said during his post-show press conference, a session filled once again with deep fashion thoughts delivered in a stream-of-consciousness monologue, save for a question or two interjected by a couple of intrepid journalists. Before he was finished, Michele would liken fashion to a circus as well as religion, and his creative role to that of a doctor and physicist. He would explain snippets of his soundtrack — the Fellini voiceover (he’s “talking about the sacredness of cinema and how much ritual there is) and Ravel’s Bolero (“a march that seems to keep going indefinitely”).

Fashion believers, Michele claimed, want to break free but can’t. “It traps you. We are all trapped. Everybody — the hairstylists, the makeup artists, everybody working together so hectically — we all say that one day we would not want to do this job anymore. I’m 48 and I don’t want to quit…it’s a powerful vortex that looks like it forces you to a life of seclusion, in which you say ‘For this, God, I have to struggle a lot.’”

Yet save for some demonstrative crosses that symbolize “a sense of belonging, of loyalty to something,” and some crisp white liturgical collars, religious references were in scant supply. Instead, Michele ritualized the show process itself, which he loves, and the multitudes of other trapped people who make it happen. Pulling the curtain on that process, his guests entered through the backstage hair and makeup area. The stylists, makeup artists and models must have been cast for nerves of steel as well as their talents, because none flinched at working and being worked on in a space overtaken by the showgoing horde.

The set was a huge circular installation encased in an opaque pink scrim. To start, the bathrobed models accompanied by an equal infantry in gray scrub-like uniforms disappeared into the cylinder, making for a ceremonial entrée. The scrim dropped to the floor, revealing a backstage-like dressing area, the models and their dressers positioned among a precision-maze of rolling racks. (Worth noting: Yes, the models got dressed in plain view; no there was no nudity, only proper underpinnings.)

Once dressed, each model took her spot at the perimeter of the now-rotating carousel, facing outward toward the audience, some making multiple trips around before the entire circle was filled.

“It gives you the idea of how powerful and circular this ritual [is],” Michele said of the staging. “There’s no doubt that something circular is fashion, something so powerful that when you think it’s moving away, in truth it suddenly comes back like a wave.”

Michele could have been talking about the clothes. They were charming, loud, mismatched, madcap, retro and over-the-top. And they were very familiar.

If Michele’s intention was to take a dystopian view of the fashion circle — you can’t get out of it and you can’t change what you do when you’re in it — then the rotating circle populated by models wearing very recognizable clothes was a brilliant ruse (you know, math, infinity and all that). But that didn’t seem to be the case. Michele talked about his love of the show ritual, and there was no bleakness to the clothes; rather, his signature offbeat mania rotated by as Seventies nerds, cutie-pie Nanooks of the North, babydolls, Southern belles and naughty prom queens in harness gowns. But the biggest subplot was a slyly fetishistic children’s wear vibe that picked up from past collections, particularly Michele’s recent men’s show. “The childish world is perfect, it doesn’t have to justify anything,” he said. “It’s the world we would like, we have to offer millions of justifications for what we wear, what we say.”

Yes, much of it looked good, and the great thing about Michele’s wacky runways is that they merchandise well — the stores always have clothes that are both wearable and look like the runway. Yet you left the show disappointed at the frenetic sameness, especially after last season when he toned down the sartorial mania a bit to strong effect (ironically, the newfound calm coming in the context of a mental institution). That pared-down take still felt like Michele, and it felt fresh. Michele has done remarkable things in his still short tenure at Gucci, along the way developing a powerful signature. But even the strongest signatures have to evolve.