Hoop earrings were really dangling magnifying glasses, while brooches pinned to knit dresses were as big as dinner plates. 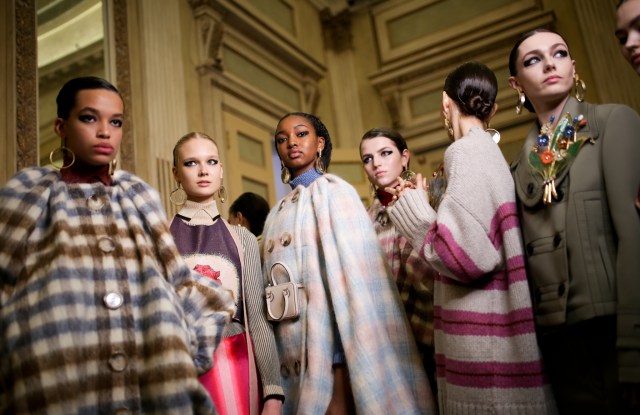 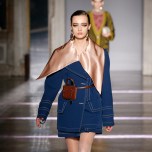 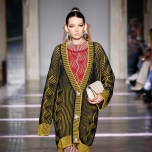 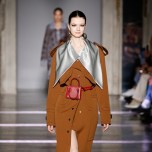 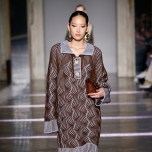 Like Lewis Carroll with Alice, and Jonathan Swift with Gulliver, Marco de Vincenzo tinkered with proportions for this collection seen through the eyes of a child. And like in “Alice in Wonderland,” things grew curiously large in this show that played tricks on the eye.

Hoop earrings were really dangling magnifying glasses, while brooches pinned to knit dresses were as big as dinner plates. The buttons on long cardigan dresses were the size of saucers from a child’s tea party set. Even the heels of shoes — 200 percent bigger than usual — and the satin collars on blouses were stretched and distorted and made to look larger than life.

“I said to myself, ‘OK, let’s play and have fun like a magician who tries to make everything giant,'” said de Vincenzo, who was inspired by children’s off-kilter drawings. “Let’s play with proportions, destroy the reality — and come back to something that is real, but more fun than reality. I wanted to give familiar things another opportunity, another possibility.”

De Vincenzo’s cocooning check or tie-dyed coats doubled as minidresses, with sleeves dipping so low they grazed the fingertips. A simple men’s wallet was magnified and transformed into a little bag worn belted at the waist, while ribbed knits were stretched to their outer limits. Tights glistened with rhinestones while rays of light flashed down the fronts of dresses and skirts.

In a moment of uncertainty, instability and fear (on the day of the show, the coronavirus had surfaced in a town near Milan) this outing was all about escapism. Thanks to de Vincenzo’s deft hand, it was kooky but never ridiculous. And, let’s face it, who doesn’t want to escape back to childhood every once in a while?