The final looks of the show were yellow and purple basketball jerseys and glittery hoodies in homage to the late Kobe Bryant. 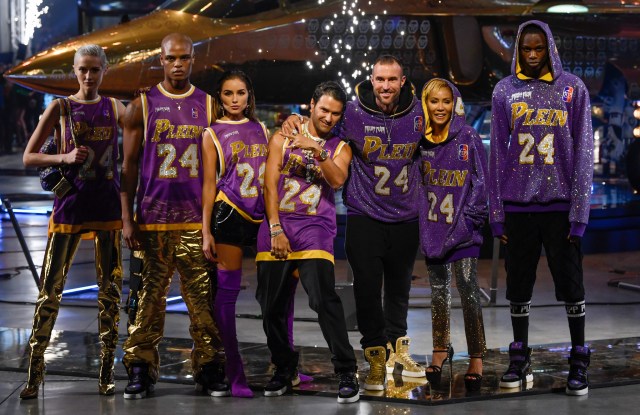 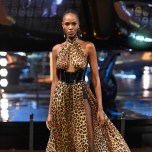 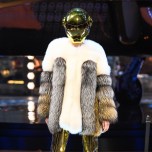 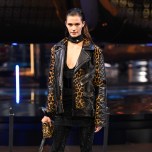 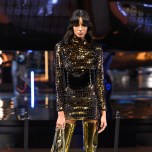 The most empowering moment of the Philipp Plein show was probably not the one the designer expected: It was when two models finally had enough of wobbling along the slippery mirrored catwalk in their sky-high, needle-thin heels and took them off to amble barefoot.

It was a wise decision: The twists and turns of the never-ending runway, which took over the cavernous hall of a Milanese exhibition space, made for nerve-wracking viewing. However, the barefoot models didn’t steal the attention from the rest of the show: how could they when the runway featured a Philipp Plein-branded helicopter, plane and yacht, as well as a Tyga concert in the middle of a boxing ring surrounded by fireworks and smoke machines?

The clothes themselves were proper show-stopping material. Not an inch of the models’ bodies wasn’t covered with either glittering crystals, punk studs, leopard print, dollar signs or see-through, cross-body, multipocket bags to carry Plein’s new scent, No Limits, in a credit-card-shaped bottle.

The final looks of the show were yellow and purple number 24 basketball jerseys and glittery hoodies in homage to the late Kobe Bryant. The pieces were part of a capsule collection, the sales of which will go to the Mamba and Mambacita Sports Foundation in honor of Bryant and his daughter Gianna, Plein announced at the end of the show. Instead of the Lakers logo, the jerseys featured a giant “Plein” in crystal-studded letters.