Walter Chiapponi in his first women's show for the brand succeeded in further developing its lifestyle image. 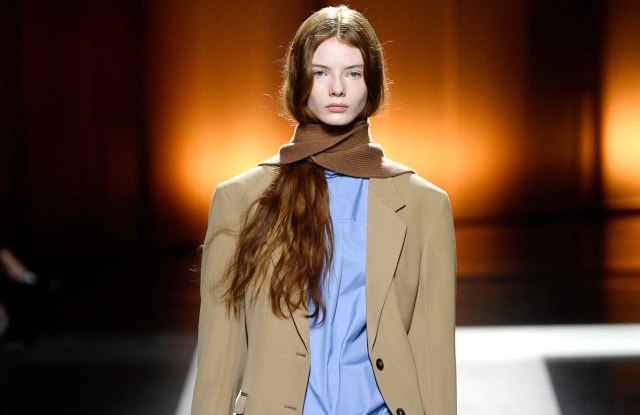 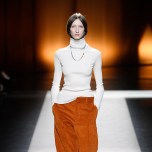 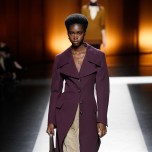 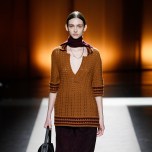 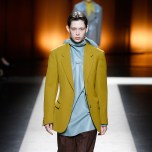 Tod’s first look clearly telegraphed that a new creative director is in place: easy and baggy sea-blue corduroy pants, worn under a mannish beige blazer and azure blouse, a wool scarf casually wound around the neck.

Walter Chiapponi, who joined the company in October after years working at Bottega Veneta with the brand’s former creative director Tomas Maier, said he “wanted to give a soul and a total look to Italian lifestyle.”

He succeeded, with a collection that had a romantic vein, seen in the mannish gray felt coat delicately embroidered with azure flowers, as well as a Seventies’ hippy touch, as in the patchwork leather coats. A beautiful plum coat was sensually worn over a pair of corduroy pants, a large hobo bag a must-have.

Chiapponi developed Tod’s bread-and-butter moccasins with chunky heels and thick stitches on the toes. In sync with the sustainability efforts the industry is putting in place, he used existing scraps of leather in structured clutches.

There were also several denim jeans, not often seen on the Tod’s runway, and puffers, which contributed to the younger mood of the collection.

Chiapponi’s interest in Fifties architecture and art — he listed Alberto Burri, Lucio Fontana and Gio Ponti as some of his favorites — and his passion for Luchino Visconti — “a myth,” he said — was reflected in the colors and bourgeois mood that filtered through the lineup.

The Tod’s woman should exude self-confidence, Chiapponi said. Well, she does.