Focusing on power and sexuality in her first coed show, the collection was less about charting new design territory and more about repackaging greatest hits. 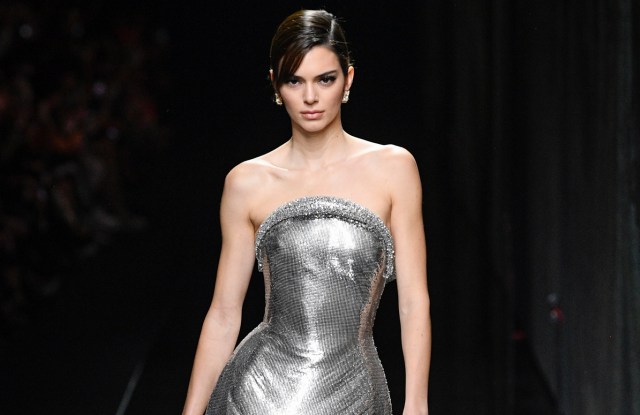 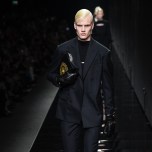 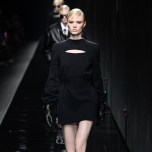 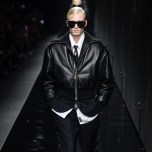 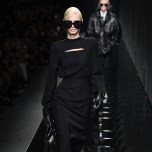 Versace has had a banner season — nearly breaking the Internet with the last women’s runway show by sending out Jennifer Lopez in (almost) the same jungle-print gown she wore to the 2000 Grammys, then outfitting new-gen voluptuous beauty Lizzo as a Hollywood goddess for the Oscars earlier this month.

But on the runway Friday night, there were no star turns other than Donatella herself, projected Warholian-style in repeating portraits on the digital video screen spanning the 40-meter runway. She may still be the figurehead, but there’s no denying the house of Versace has changed under Capri Holdings: it’s less about charting new design territory, and more about repackaging greatest hits, with a few updates for the changing times. Having tackled age inclusivity (thank you, Nineties supermodels and J.Lo) in September, this season, it was on to gender.

“Today’s generation does not care about gender…there’s no female or male,” the designer said during a preshow press conference of her decision to take her show coed. That was after she opened with a few choice words about the horrific rise in hate crimes around the world: “What happened in Germany a few days ago is almost the last drop, I mean, we need to act and to be fast and we cannot permit young people to think that going back to the past, to the horror of the past is a good thing.”

You could feel the passion in her voice. Less so in the collection, which seemed to favor commerciality over conviction. Versace, like Miuccia Prada and Silvia Venturini Fendi this week, said she set out to explore power and sensuality. But this was not a deep dive into gender and sexuality so much as a surface skimming. This despite the fact that Gianni Versace was one of the first designers to come out in the Nineties, Donatella is a gay icon, Billy Porter and other pioneering celebs have been busting gender-fashion norms, and now more than ever, consumers seem to want brands to engage. It felt like a missed opportunity to say more.

For women, there was hourglass tailoring in bonded fabrics, including gorgeous blazers with corsetry and articulated seams worn with flared trousers. For men, there were macho leathers, including oversize lush bombers; and for both, twisted rugbys, goofy Nineties oversize floral sweaters, allover barocco printed shell suits, crystal-embroidered tuxedos and lots of stuff to buy, from logo tube socks to eyeglass chains.

Slashes, a house signature, aerated black jersey minidresses, strong-shouldered and sophisticated, or short and sultry. Other women’s jersey numbers had open backs with arching domed skirts. But despite the designed-for-Instagram special effects (including a trippy LED video mirror that reflected the front row), the whole experience felt a bit sanitized. Even the LBDs and chain-mail cocktail dresses with 3-D crystal beading reminiscent of Drew Barrymore’s draped champagne chiffon 2010 Golden Globes gown could have had more sizzle. Wonder if Drew would fancy a trip to Milan next season?