Wes Gordon offered a younger take on the house's signature ladylike looks, with a fall line that exuded elegance with a new sense of ease. 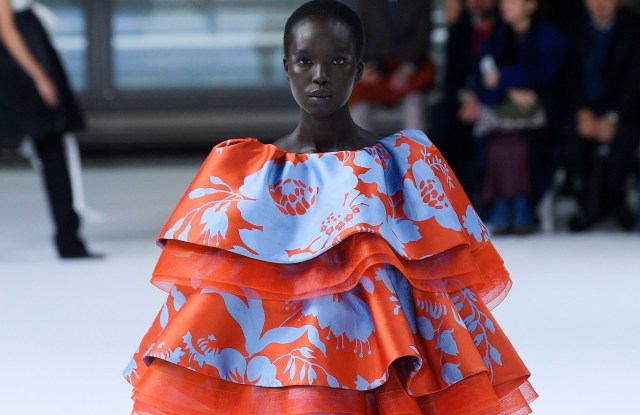 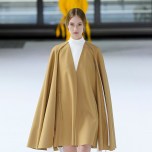 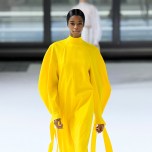 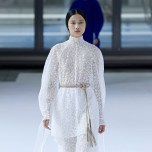 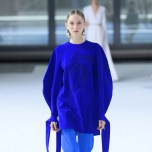 Carolina Herrera hails from that complicated, once-thriving fashion space of traditional, tony lady dressing. As creative director, it’s Wes Gordon’s mandate to transition the brand to a younger, more versatile take on that genre, one with more currency and less hauteur, without sacrificing polish. During a preview, Gordon said having defined his own codes for the house — which draw on the house founder’s: color, exuberance, a sense of joy — he now feels ready to express them with less cacophony, focusing more on singular “grand gestures” per look, rather than trying to say too much at once.

Gordon showed at The Shed, where the light radiating inward through the massive glass enclosure looked lovely even in pre-rain gloom. Covering the 14,000-square-foot floor: off-white carpeting, which will be shipped off to a company called Carpet Cycle for recycling. While the set pulsed with modernity, Gordon looked backward for inspiration, to the 17th-century Baroque painter Francisco de Zurbarán, whose work he recently discovered. From it, Gordon took his vibrant, saturated palette and often his color combinations.

He also translated an aura of serenity not typically associated with such upbeat hues. His models wore little obvious makeup save for lipstick from the new Carolina Beauty line; their hair was pulled back neatly from a center part. Many worked looks in which the grand gesture was a bold color delivered with purity of line — by night, a red wrap gown with attached cape over a high-neck fuchsia underpinning or a high-neck, long-sleeve, A-line purple gown; by day a trumpet-sleeved canary yellow belt or purple skinny ribbed knit ensemble over pea green boots. Somehow, he retained the mood (at times with a nod to Valentino’s Pierpaolo Piccioli) even with exuberant ruffles and voluminous, bold, floral dresses, although these will easily take on an ebullient attitude when they migrate from runway to real-life party.

Gordon also offered plenty of black and white, including a fabulous variant of the house white shirt, cut long and boxy with crisp embroidery and worn over a black skirt. The takeaway was elegance with ease, a chic, smart course for Gordon to set at his Carolina Herrera.