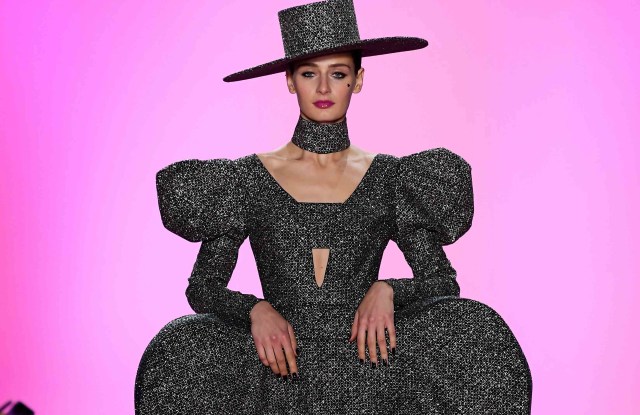 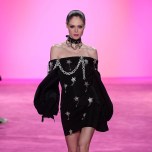 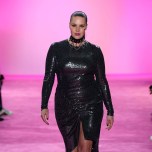 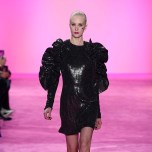 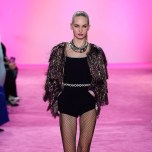 “We all have a little Harley Quinn in us.”

That was Christian Siriano’s backstage bon mot prior to showing his collection at Spring Studios on Thursday night. While it’s empowering to think we can all channel an inner pigtail-swinging, badass superheroine, Siriano made the connection less with his clothes than with his models’ colorful hair, streaked in vibrant pink and blue, just like the Joker’s volatile-spunky ex.

“Birds of Prey,” Harley’s very own movie that opens today with Margot Robbie as Harley, sponsored Siriano’s show. Beyond the hair, the most obvious visual connections (at least as indicated by the trailers), were the big white hand sculptures that punctuated the set; they were shipped especially for the occasion. “There’s this gothic fun house that was my favorite part of the movie,” Siriano said. (He saw the film in advance.) “There are these crazy life-size sculptures that I felt were almost like Dadaism, surrealist.” Siriano also worked in some major tinsel-fringe action, including a massive, shimmery ballgown inspired by a jacket Harley makes for herself in the movie.

Beyond that, the connection seemed more philosophical than stylistic. Siriano absolutely believes that every woman can be her own superhero, and that she should work her assets to the hilt using clothes as an empowerment tool. Save for a single trenchcoat, nothing here could even pretend to masquerade as daywear, but there were degrees of evening, from tailoring (sexy frock coat cutaway over peekaboo striped pants) to steamy short dresses with varying degrees of embellishments (simple sparkle, billowing sleeves, chain festoon) to arch-diva gowns (liquid pink with cutout bodice detail; glam one-sleeve numbers, skirts slashed to there). And yes, ballgowns, some with a single flying buttress shoulder, some out-there geometric curiosities that may or may not reference the movie. We’ll have to see.

It’s an audacious aesthetic that’s not for every woman. But it is for many women, of many different body types, a point Siriano drove home once again with his diverse casting, and his models all wore the clothes with self-assured power. Real life, too, offers plenty of anecdotal evidence that legions of women want to look sexy, sparkly and in control when they get dressed up, whether for the Oscars (as we’ll see on Sunday night), or less high-profile soirees. Either way, Siriano played to them here with attitude and high glam. Led by Leslie Jones, his fans in the audience couldn’t contain their glee. Jones’ unfiltered zealousness could give Harley a run for her money.