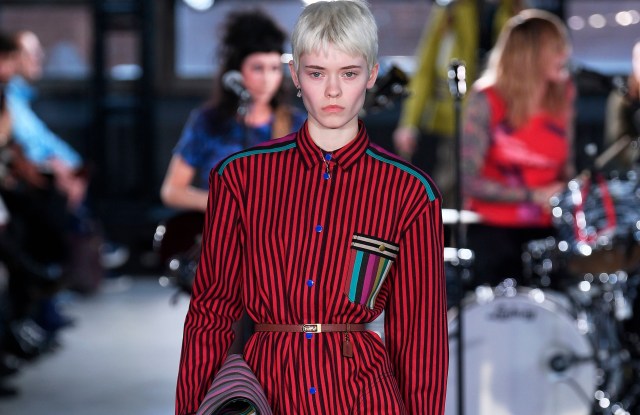 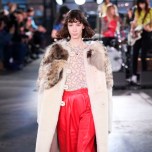 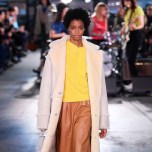 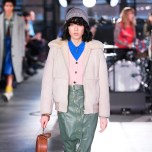 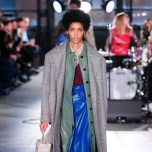 The Coach show offered an energizing moment of fun on a gray, rainy winter day. Stuart Vevers re-created “the quintessential New York City loft” in a former warehouse on 12th Avenue as a backdrop for his fall collection. The men’s and women’s apparel and accessories were intended to continue a narrative that started last season when the designer presented his interpretation of “stripped-back New York cool.”

“This is chapter two,” Vevers said during a preview at the Coach headquarters the day before the show.

The fall collection of “pop heritage” daywear pieces was designed to blend the brand’s 79 years of history with Vevers’ self-confessed “pop-culture obsessions.” The designer also tapped Jean-Michel Basquiat’s abstract artwork to emblazon on pieces such as a trenchcoat, a sweatshirt, a scarf and a range of bags in distinct geometric shapes such as triangles, circles and rectangles. Celebrating the collaboration with the Estate of Jean-Michel Basquiat, Vevers invited the late artist’s sisters, Jeanine and Lisane, to the event, while Basquiat’s niece, Jessica Kelly, walked the show.

Cool, covetable outerwear pieces, including trenches embellished with snaps, charming shearling coats with creative patchwork motifs, quilted leather jackets featuring bag-inspired turn-lock closures offered plenty of options for the city woman on the go. Styled with sneakers with a vintage vibe and colorful socks, the looks, injected with a dynamic, polished practicality, featured colorful leather skirts with front snaps, tomboy culottes, impeccable mannish shirts, but also sweaters made feminine through the addition of delicate lace details. Multicolored striped fabrics, which were used in the past by Coach for the bags’ linings, made an appearance on outerwear, dresses and separates, which exuded that young, creative vibe that Vevers wanted to telegraph with this cohesive and coherent collection, which felt utterly appropriate for a brand in the process of expanding its ready-to-wear proposal, but that is still rooted in the accessories business.

In men’s wear, Vevers drew on Coach’s roots in leather to create a beige trenchcoat with sporty details such as nylon zips. The stripes that popped up in the women’s offering also made an appearance in men’s, but in a more subdued color palette as shown in an outerwear style that was reminiscent of a railroad uniform. Vevers also presented shearling and leather bombers, some more clean and essential, others enriched by interesting graphic details.