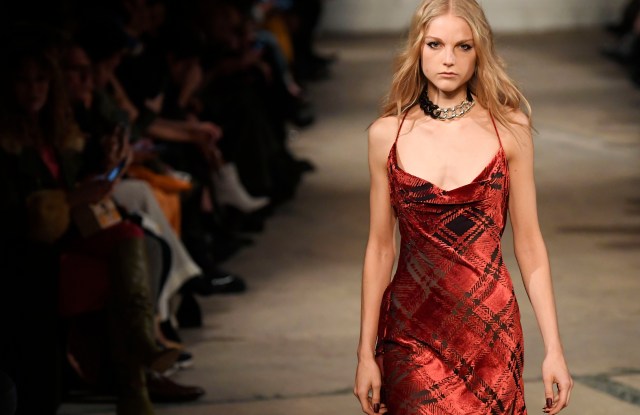 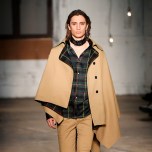 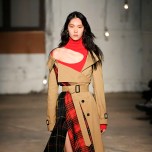 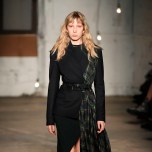 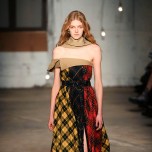 Is Fantastic Mr. Fox a Monse guy? With that lighthearted musing, Laura Kim and Fernando Garcia got started on fall. They watched Wes Anderson’s film and thought the foxy fellow’s getups nodded in their direction.

That led them to delve into tartans and an exploration of punk, a concept that the designers noted seems antithetical to their own positive outlooks, “ridiculous,” even according to Garcia, who dubbed Mr. Fox “adorably evil.”

Perhaps so, but there was nothing cute about this collection. The punk construct allowed Kim and Garcia to work a tougher manifestation of their deconstruction-reconstruction oeuvre — less polish, more power. They opened with a trench-tartan dialogue, contrasting the plaids with classic drill, the first look out a coat cut away at the shoulders and spliced with an impeccably cut tartan jacket, worn with clunky boots. A series of such combinations followed, some with a single tartan, some with multiples, their navys and bright yellows and reds in bold visual conversation, always in the context of the designers’ exacting, innovative tailoring. This was even the case with a multi-plaid dress that was attached to a single trench lapel for an asymmetric off-the-shoulder line. The result was a different take on Monse’s modern-chic signature de- and reconstructions, the punk element taking on casualization with gritty attitude.

It looked fabulous. Yet it made for complicated stuff. With any sighting of tartan in a high fashion context, the mind drifts to Alexander McQueen, both the house founder and Sarah Burton, and to the grand dame who started that intersection, Vivienne Westwood. That’s fine; their iconic templates have crossed over to public domain inspiration. More specifically, Kim and Garcia rang a Sacai bell. That ding felt too obvious not to mention, but it may be an unfair criticism. Like Chitose Abe, de- and reconstruction is what Kim and Garcia do; it’s the founding aesthetic of their brand. Only in the past, it’s never looked like Sacai. Typically, they start with more dressed-up men’s wear-inspired tailoring. Here, they took a sportswear approach, which is how Abe usually starts. But she doesn’t have a patent on the casual collage. Two, or in this case three, people can produce similar results in their work without anyone having pilfered.

Opinion writing can be a bit like therapy; you have to work through your feelings, sometimes without resolution. What’s not in conflict: Kim and Garcia delivered a visually compelling collection, the clothes beautifully thought out and executed.