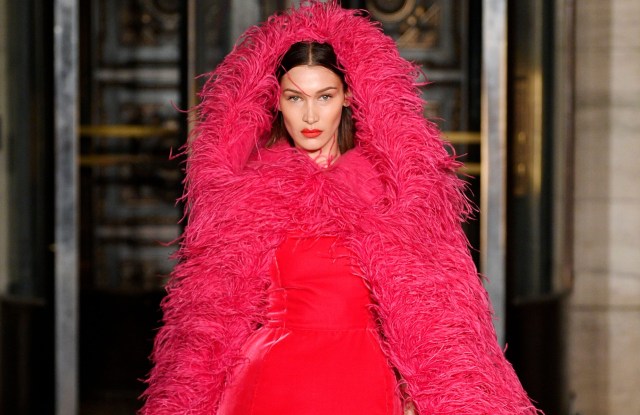 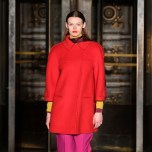 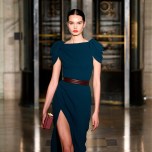 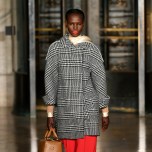 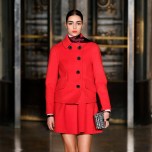 Monday night’s Oscar de la Renta show went down like a shot of glamour in this party pooper of a season, when New York has been knocked down and abandoned something fierce. It was late — nearly 45 minutes late on top of an unnecessary 9 p.m. time slot, testing patience of a high wattage crowd that included Annette de la Renta, Phillip Lim, Brandon Maxwell, Ezra William, Kathy Hilton and Nicky Hilton Rothschild.

But Fernando Garcia and Laura Kim wanted to have a party, and they did (though a sip of Champagne might have been nice), conjuring the house’s high society past and Hollywood present, and riding high off dressing double Academy Award nominee Scarlett Johansson.

Using Truman Capote’s 1966 Black and White Ball as a starting point, they dipped into the house archives of bubble skirts and swans. “It was a party that Oscar enjoyed with Francoise,” Garcia said of the nostalgic impulse that led them to that epic night, and to clean, colorful tailored Sixties daywear updated for today, such as a punchy red double-face wool coat with double button cuff detail, over pink trousers.

Caravaggio still-lifes inspired a moody floral silk faille dress that was pretty without being sweet. Herringbone coats and cozy sweaters were worked with crystal floral embroideries, and swingy short hems with tall boots kept things from feeling too stuffy.

But the real magic came with the fantasy eveningwear; they balanced the nostalgia trip of swan gowns of yore with today’s sexy minis and dressy-casual evening looks, such as a fuchsia draped silk faille bustier top over cigarette pants.

Bringing it back to Hollywood, the designers also veered, someone quixotically, to a “Fantasia” reference. Apparently, they identify with the Sorcerer’s Apprentice role, and how a young upstart uses magic in which he is not fully trained, ahem. Garcia got Disney’s blessing to use some artwork from the film on a starry-night gown. (It’s not a sponsorship like their Monse x Disney collaboration, he insisted, though one wonders if we’ve seen the last of it.)

The collection built to a symphony of dream dresses, including cousins to Johansson’s Oscars gown: a silvery draped fringe mini, and a black velvet exposed corset dress. “Fantasia” firework embroidery burst from the bodice of a fil coupe gown. A gold plissé number framed the face with feathers, and a gilded body con mini with a plethora of fan pleats. A shocking pink hooded minidress worn by Bella Hadid was all feathers, a most elegant breed indeed.

The designers may not have broken new ground with this collection, but it was still a beautiful celebration — albeit a tardy one.