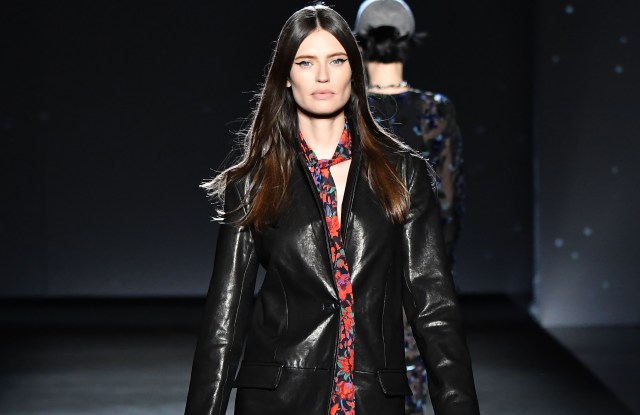 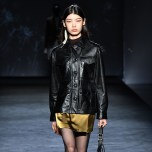 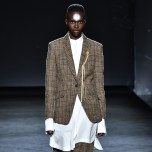 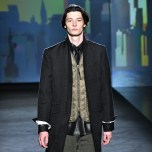 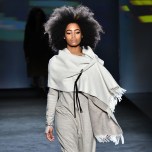 “I’m trying to get my head around, at the moment, what lifestyle means, how you define Rag & Bone?” Marcus Wainwright expressed over the phone prior to his fall show, questioning the frivolity of fashion, how serious it can take itself and even the meaning of life. These ideas are ones similar to ones Wainwright has expressed before, hence his rationale for eschewing thematic collections and traditional runway shows. The designer isn’t attempting to reinvent the wheel, but rather offer up inherently wearable fashions in a fun way.

For fall, he added conceptual imagery (an exciting, digital sci-fi backdrop designed by Limelight) to the “non-conceptual” (his words) fashions. While the effects had nothing to do with the clothes, they added a more engaging element in tandem with the bumping music.

When it came to the clothes, Wainwright described designing new collections as “pushing iconic wardrobing,” due to the brand’s success in refreshing military, English tailoring and sporty brand classics, all of which could be seen throughout.

For fall, the designer offered “a study on twisting Rag & Bone, twisting silhouettes.” There were delightful oversized parkas, leather head to toe and layers of knits and casual, tailored suiting and topcoats for  men and women. While the clothes themselves were straightforward, the styling was left open to individual interpretation (Wainwright noted that while his men’s collection had already been shown, it was restyled for the runway). Is the Rag & Bone woman a club-going, silk-mini-clad, leather knee-high-lug-sole-boot-wearing woman? Or is she the more buttoned-up, full suit or plaid shirtdress type?

Questions aside, the collection’s strength was once again the brand’s continual reimagining of classics, mixing uptown/downtown edge with a play on masculine/feminine.