Burch mixed modest silhouettes with power accents for a look one might call "Little Women" chic. 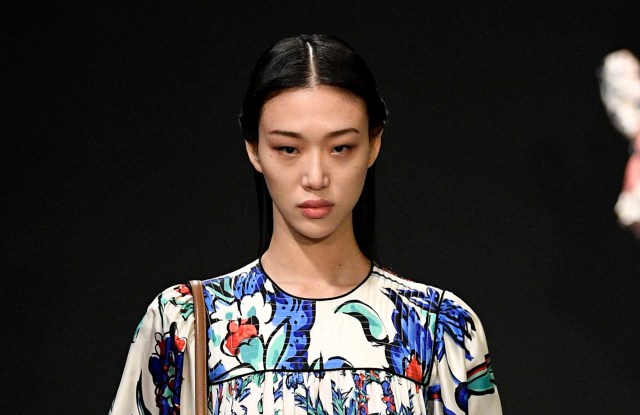 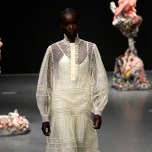 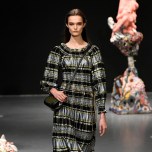 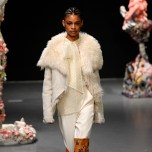 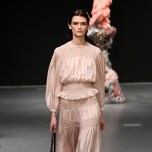 Sotheby’s wasn’t a bad place to spend a Sunday morning, looking at colorful porcelain artworks by Francesca DiMattio, whose material exploration of female domesticity includes sculptures decorated with clay that has been squeezed through a kitchen garlic press.

“She bought my very first ceramic sculpture I ever sold in 2012, so it’s actually really sweet to reconnect, and I think there is a common thread of trying to infuse decorative, in her case with prints and mine with materiality, with strength,” said the New York artist of her patron Tory Burch, who assembled a mini exhibition of 11 of DiMattio’s giant works for a runway set, and enlisted the artist (who’s also a painter) to create painterly floral prints for the collection. There was a performance in the mix, too, from singer Alice Smith, serenading models with the song, “You Don’t Own Me,” as they walked the galleries.

“I wanted to feel a bit more emotion and have it be more intimate,” Burch said backstage of the setting (all four galleries of it!) for the quietly romantic collection, mixing modest silhouettes with some power accents for a bit of “Little Women” chic.

Burch used lots of traditional details like smocking on a black, white and gold-striped silk dupioni dress that looked like it could be a wardrobe workhorse, rosette-pattern jacquard on a Victorian jacket and riding pants look, and porcelain florals throughout, including on a vivid blue satin blouse and asymmetric pleated skirt worn with a black leather Sgt. Pepper jacket.

Candy-colored knit organza sweaters over bow blouses added a sweet, homespun touch to fluid long skirts anchored by flat boots. And snug little jackets maintained a through line of femininity (the best in raw-edge tweed), when paired with equestrian pants tucked into swashbuckling over-knee boots (the most fun ones were dotted with florals).

If there was a weak spot, it was the caftans with frilly white bibs, which were a touch dowdy. Better were the convent-cool, black-and-white crepe dress with point collar, and the DiMattio-designed bright blue painterly floral-print smock dress. It had swing like Burch’s classically pretty trench.

A split blue porcelain floral and black crepe-de-chine dress, shaped by a diagonal row of buttons and trimmed in black sequined fringe, was another power player in the charming, if a tad uneven, lineup.