Demna Gvasalia used his runway as a warning about "the consequences of our lifestyle." 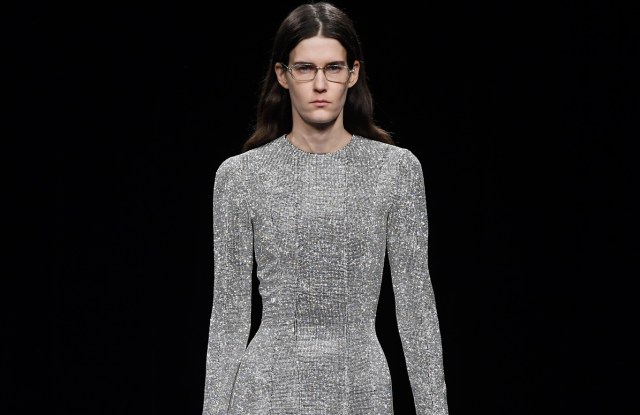 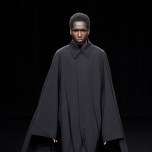 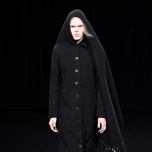 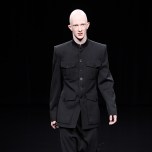 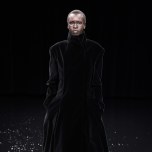 Guests arrived to a pitch-black auditorium at La Cité du Cinéma movie studios, its raised floor covered with water up to the first three rows of seats, creating a vast, mesmerizing reflecting pool. When the Balenciaga show started, projections overhead morphed from clouds to blue skies to flocks of birds to gushing waters. Eventually, that ceiling would lower, a manifestation of the sky actually falling. “I just wanted something quite emotionally triggering and quite sad, and I thought about flood,” Demna Gvasalia said later. “In general, the consequences of our lifestyle — flood is kind of a metaphoric thing.” He added that his flood wasn’t supposed to be water, that he’d scented the room to suggest something more frightening, kerosene.

Kerosene dreams aside, Gvasalia wanted his models to look like they were walking on water, à la a certain Biblical stroll. Appropriately, they started out in full-on monastic garb. This was the collection’s primary motif for women and men, intended for both spiritual and fetishistic resonance. To the latter point, Gvasalia said as a child, he wondered why priests could wear dresses but he couldn’t. Yet there was nothing celebratory about his embrace of the look. Rather, the mood was a dark one, all the more so in comparison with what had preceded it. Many in the audience had just attended Kanye West’s glorious Sunday Service, which offered a different take on church demeanor — a joyful one delivered by voices 120-strong. It’s unlikely Gvasalia’s monks, unrelenting in their sobriety, would have approved.

Eventually the monastic robes gave way to coats, trouser suits, sweaters with skirts or pants, and every other imaginable way of dressing in black. Gvasalia also interjected dollops of color, first in the simplicity of a bright red clutch carried by one of the men in black, the insertion of a floor-length red vestment here, a hot pink dotted shirt tucked into leather skirt there, and the occasional respite of a floral coat. Gvasalia’s other themes: literal motocross and soccer uniforms for men, and for women, new takes on his now iconic pagoda-shoulders in sharp tailoring and printed dresses with fluid skirts and long, full sleeves that looked a different kind of ceremonial garb. The collection’s newest — and most fun — idea came at night: a catsuit-cum-clingy-gown hybrid that isn’t for the faint of heart, but should find plenty of glam adventurers among the celebrity set. Kim Kardashian West comes to mind. The lady wears Latex to church.